March has been a crazy month for me. And now I am realizing it will be over as of tomorrow! I had the opportunity to go on three very different but equally amazing trips, traveling back and forth across the Atlantic without much of a break. I can’t wait to share my pictures and stories from all three, but for now I’ll start with the first. George and I went to the Lofoten Islands in Norway at the beginning of the month in the hopes of seeing the Northern Lights. The Lofoten archipelago is above the Arctic Circle so I knew we had a good chance, but it is also super beautiful and I would not have been disappointed had we not seen the lights.

We arrived in Narvik on the mainland of Norway in the afternoon on a Friday leaving us with a three hour drive to our first hotel in Leknes, near the middle of Lofoten. We made it to the Trollfjord at dusk, pulling over multiple times to get out and take pictures. Everywhere we looked, the views were incredible. 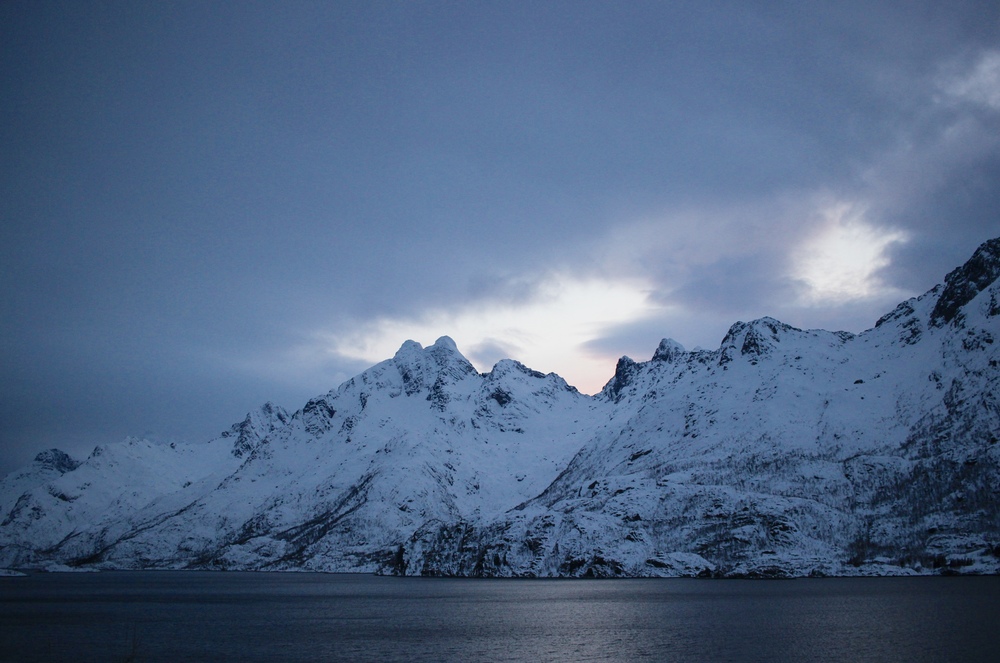 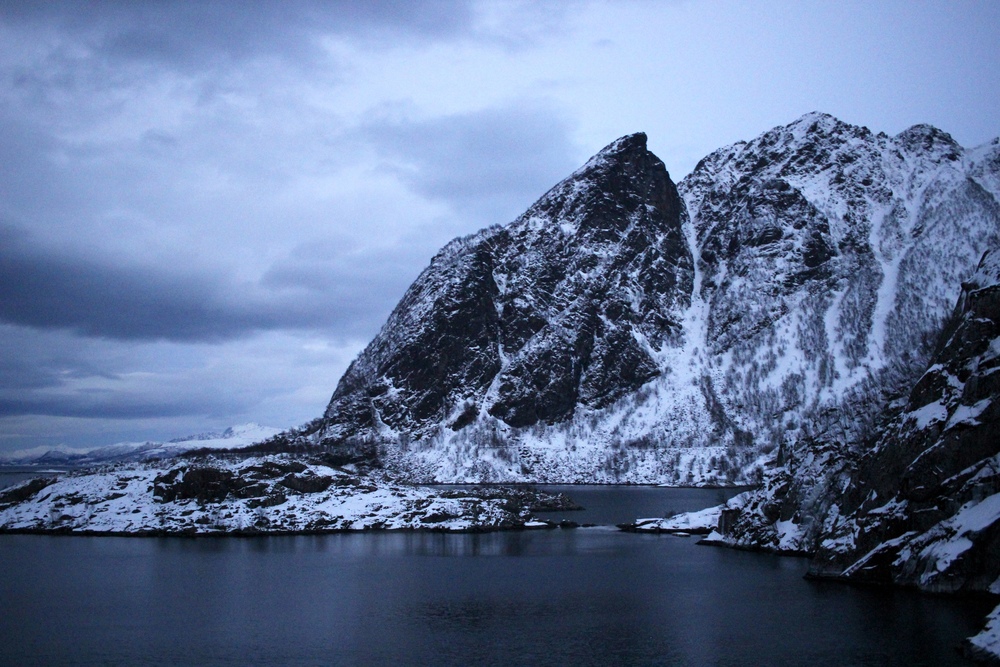 Just as the last hint of light disappeared from the sky, we pulled into the town of Svolvær. We stopped in Svolvær because it is the largest town in Lofoten and we needed to stock up on supplies for the weekend. 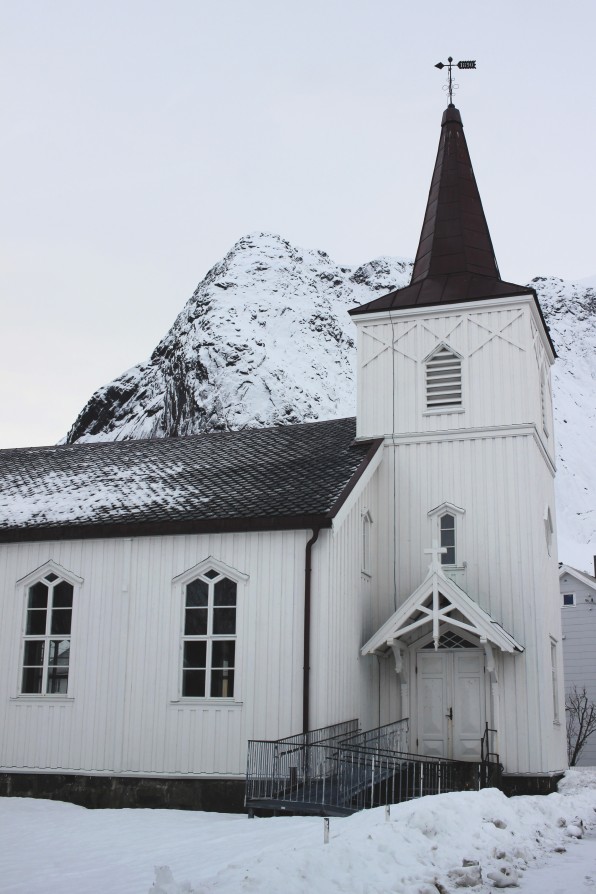 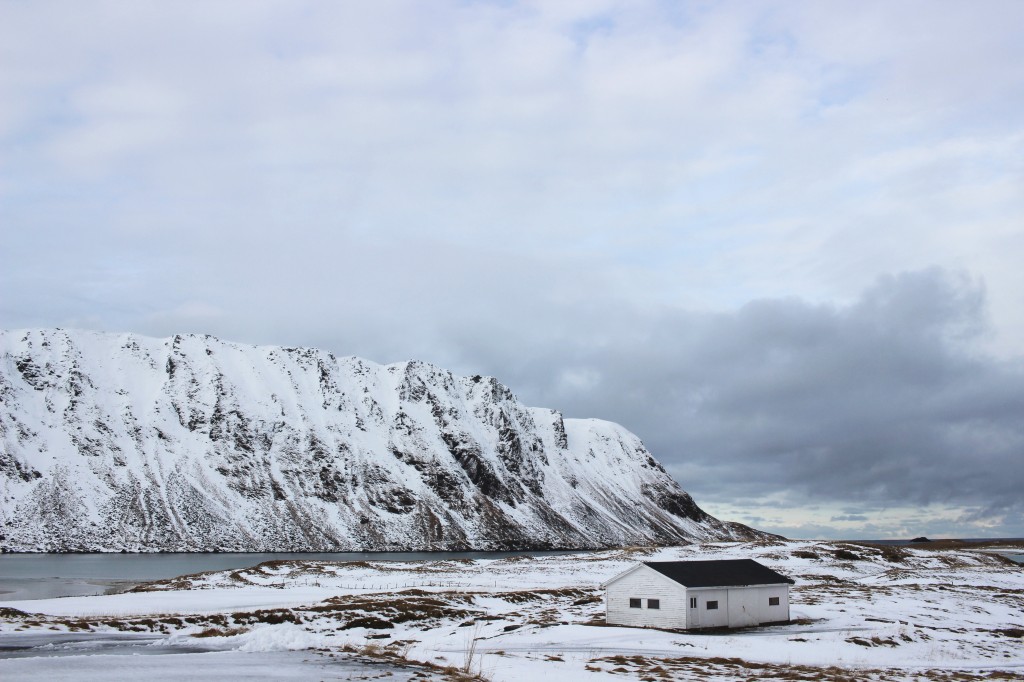 That first night was very cloudy and we didn’t even bother checking for aurora. The next morning we drove to the town of Å, which is actually pronounced like “Oh.” Å is near the tip of the islands in the west and it is literally where the road ends. 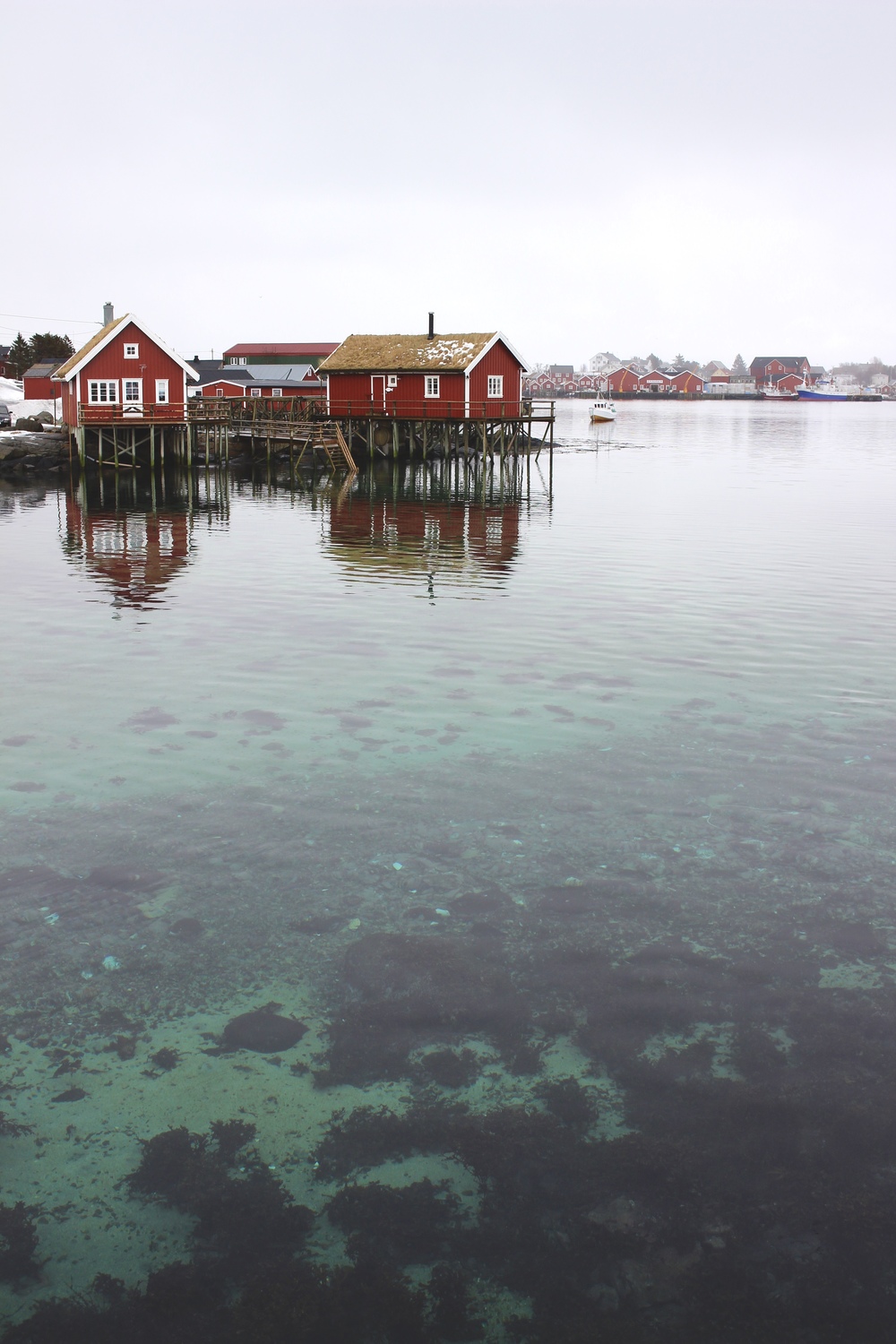 It was really nice to see the islands in the daylight because we could see how clear and blue the water was. I should also mention how warm it is there, considering we were above the Arctic Circle. The weather was not too different from the weather we experienced in England at the time. It was slightly colder and snowed every day we were there, but mild winter temperatures overall. 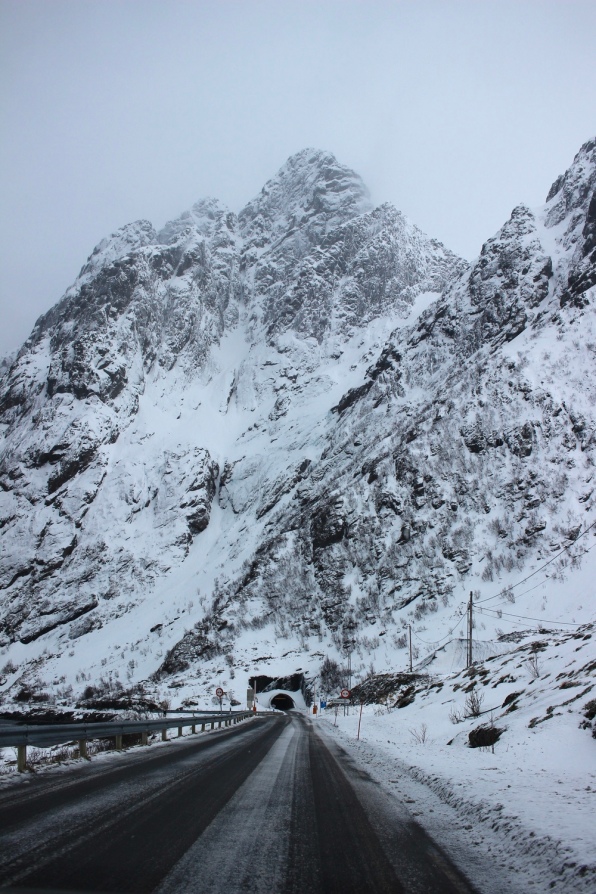 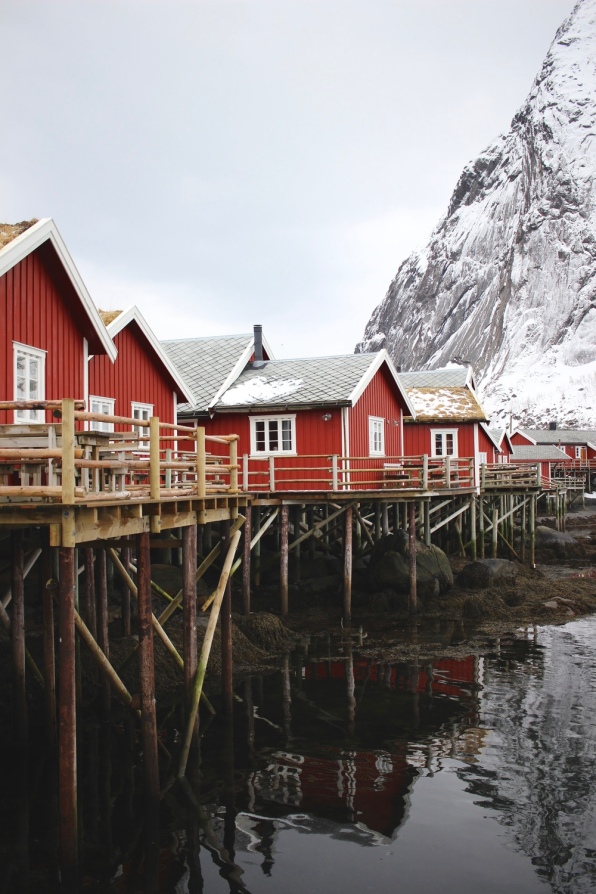 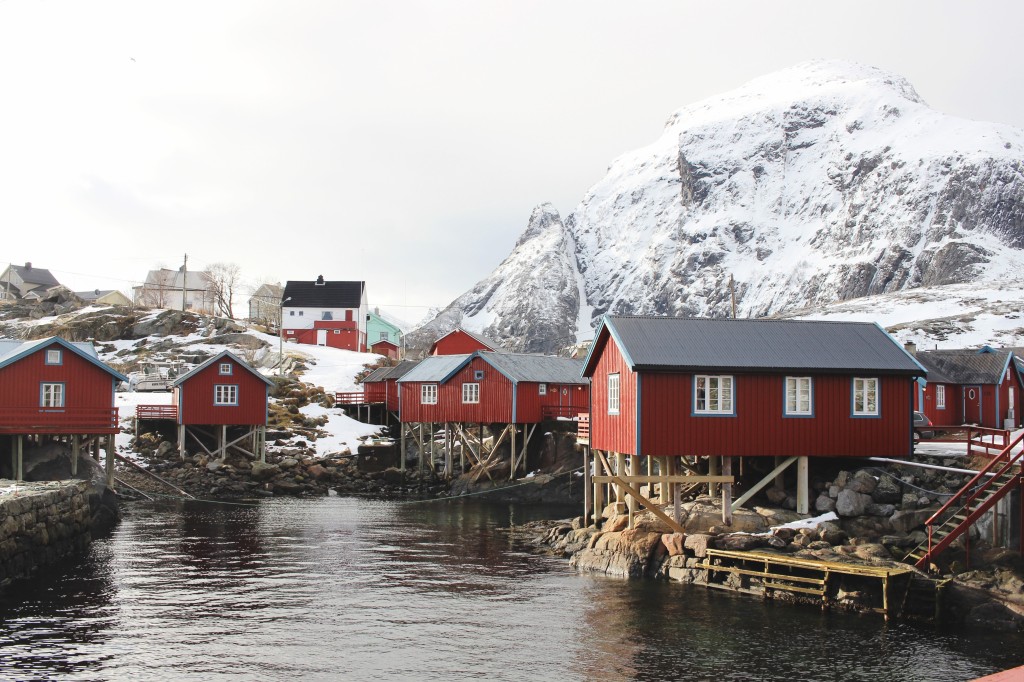 We reached the town of Å hoping to check out the cod liver oil factory and museum, but sadly it was closed for the winter. In fact, most things in the archipelago seemed to be closed for the season. Luckily, we made dinner reservations at what appeared to be the only restaurant in Hamnøy, which is where we spent our second night. The restaurant, Krambua, was amazing by the way. I especially recommend anything with cod! 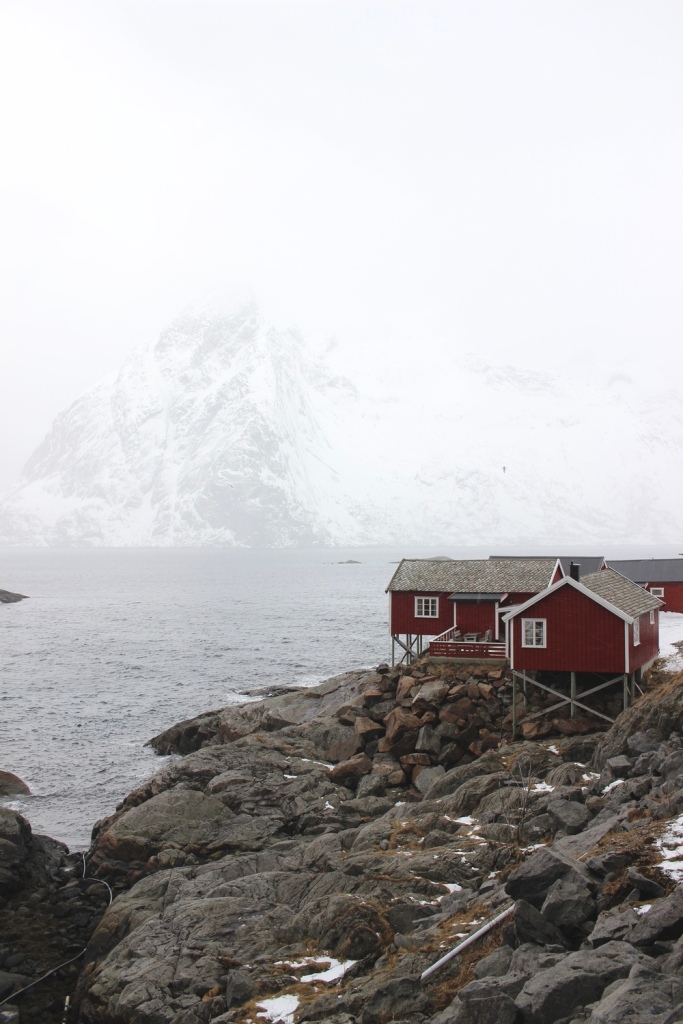 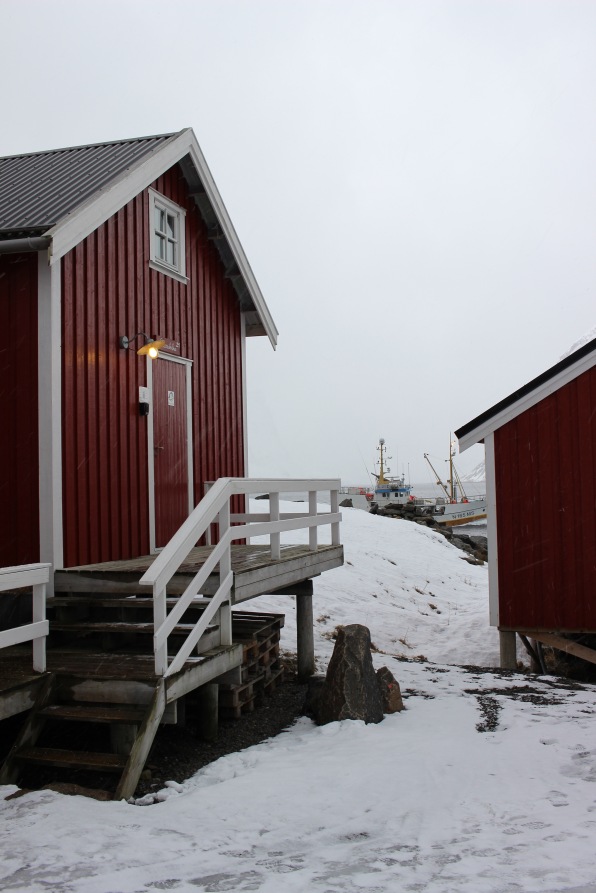 We spent Saturday night in one of the little red fishermen’s cabins you can see in all the pictures. They are called rorbuer in Norwegian and we stayed at the Eliassen Rorbuer in Hamnøy. It was basic, but comfortable and for sure the best accommodation on the islands. That night, we drove out of town a little ways, to try our luck with the aurora. We could tell they were up there behind the clouds, but there was no way we would have a clear view of them, so we called it quits. 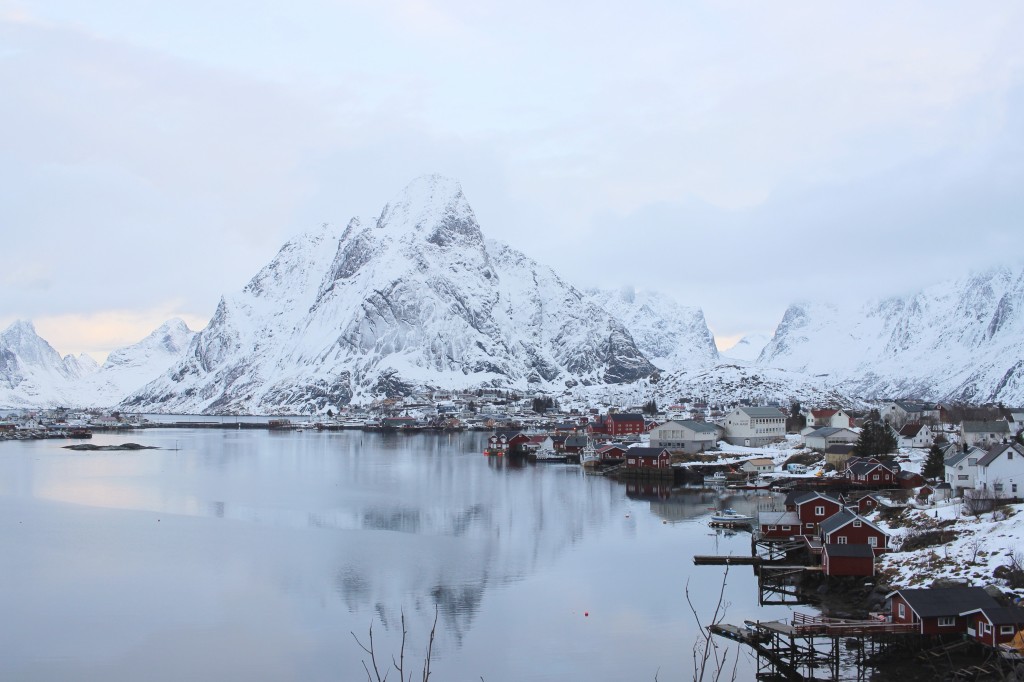 The next day we we woke up early to watch the sunrise over Reine, a small fishing village and the next town over from Hamnøy. To be fair, all of the villages in Lofoten could probably be described as small fishing villages, but Reine is the most famous. In the winter, Arctic cod migrates to the islands in millions and the fishermen are out in force. We watched the fishermen bring in their catch each day and hang them up to dry on these wooden racks. When cod is dried in this way, it is known as stockfish and even with the windows rolled up, we could smell them everywhere we went. 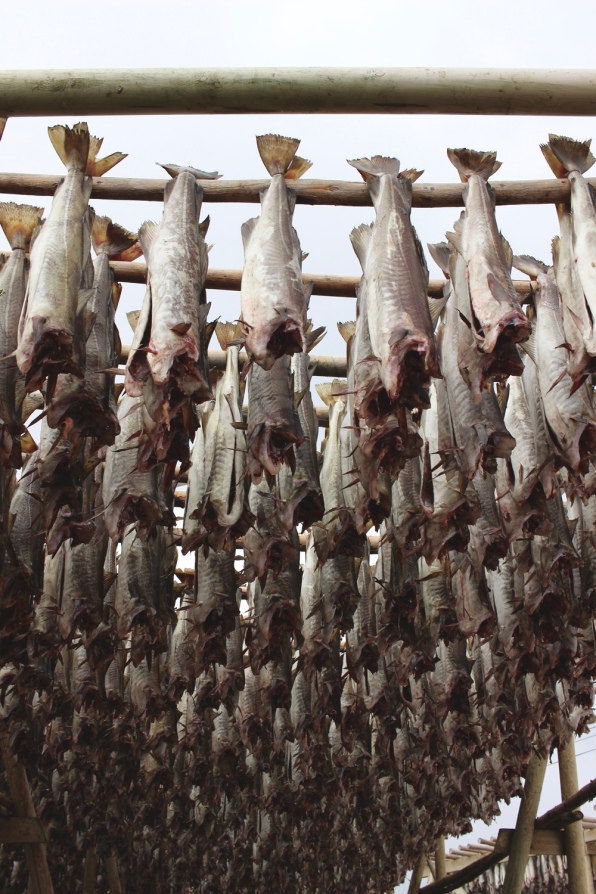 Next we visited the Lofotr Viking Museum on the island of Vestvågøy. It was technically closed, but the door to the Viking longhouse was open, so we took a peek. We had planned to experience the Viking Feast here, but the timing just wasn’t right. 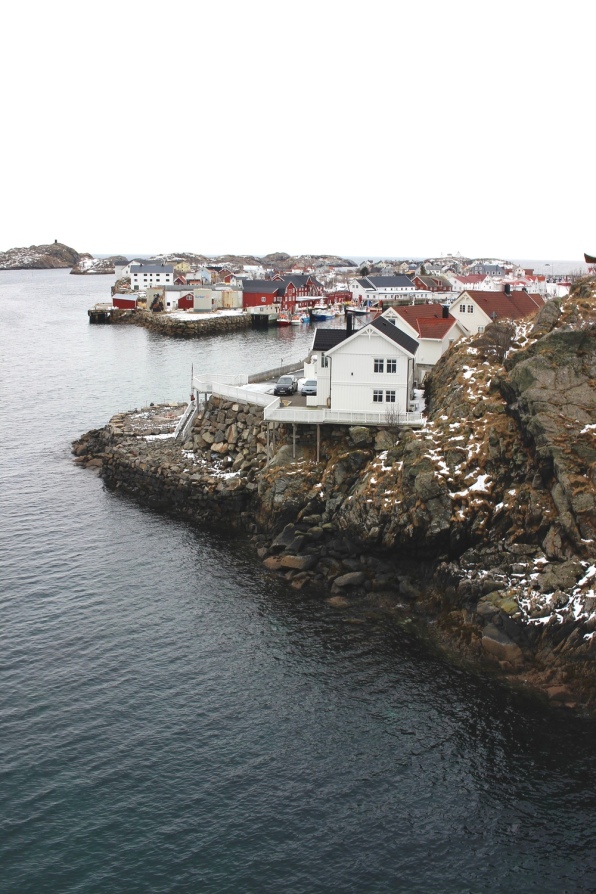 Our last stop before heading to our hotel in Svolvær was yet another fishing village, Henningsvær. Henningsvær actually seemed to have a lot going on. There were a couple of restaurants, cafes, and even some shops that were open! It was snowing at the time, so we decided to wait it out in a coffee shop. On Lofoten they say, “if you don’t like the weather, just wait five minutes.” And we found that to be undeniably true.

On our last night in Norway we went to an ice bar and exhibition called Magic Ice which was a short walk from our hotel, the Scandic in Svolvaer. It completely made up for the fact that we weren’t able to stay at an ice hotel on this trip. On arrival, we were offered parkas and gloves in case we got cold and served crowberry wine in ice glasses. As we made our way through the exhibition, we found that there were cozy nooks throughout the space with ice tables and seats covered in reindeer furs. It was certainly cold inside, but I couldn’t help wanting to stay there all night. 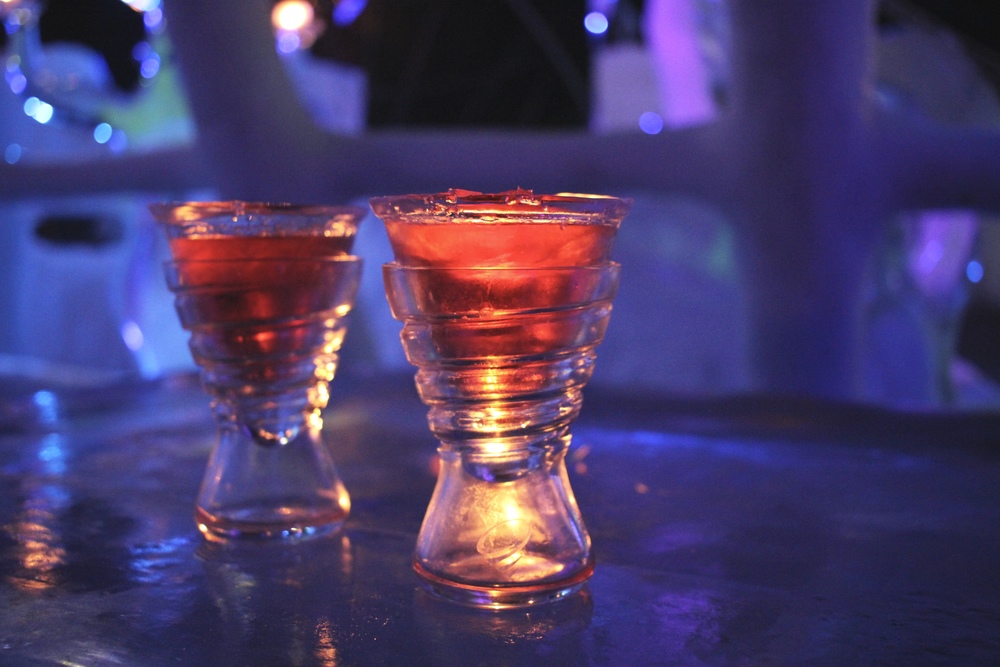 However, I knew our best chance of seeing aurora was that night, so we left the ice bar soon after. As we walked outside and looked up into the sky, we both realized pretty quickly that the aurora were happening! It was fairly cloudy and they were very dim, but definitely green. 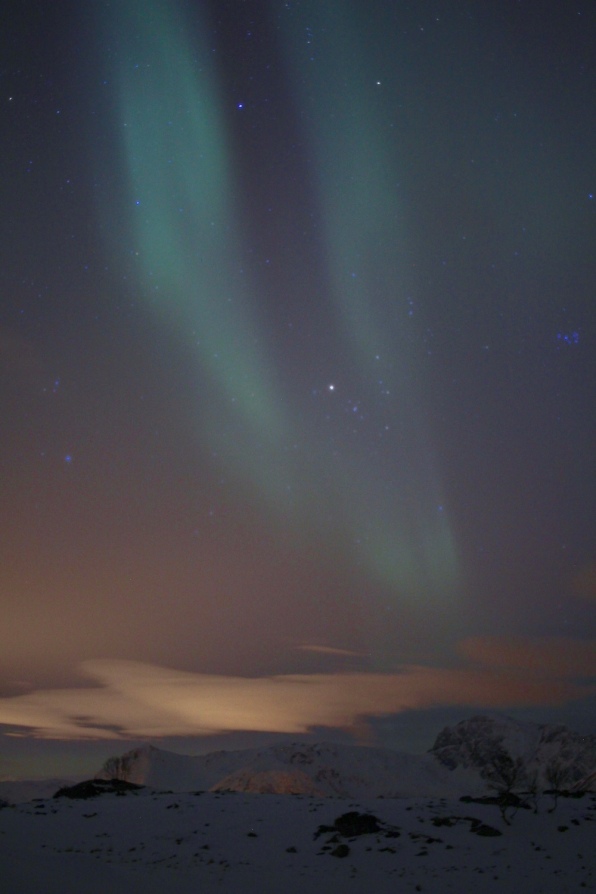 We ran to the car and drove almost an hour outside the city, but it was so worth it. I’ve seen the Northern Lights (Nordlys, as the Norwegians call them) in the past, but I’ve never seen them like this. They moved across the sky for hours before either George or I realized how tired we were. We went back to our hotel feeling happy and exhausted, but mostly sad that we had to leave in the morning. As it turns out, even if we had stayed in the UK we could have seen them, but I don’t think it would have been quite the same.

2 thoughts on “Norway: The Lofoten Islands”