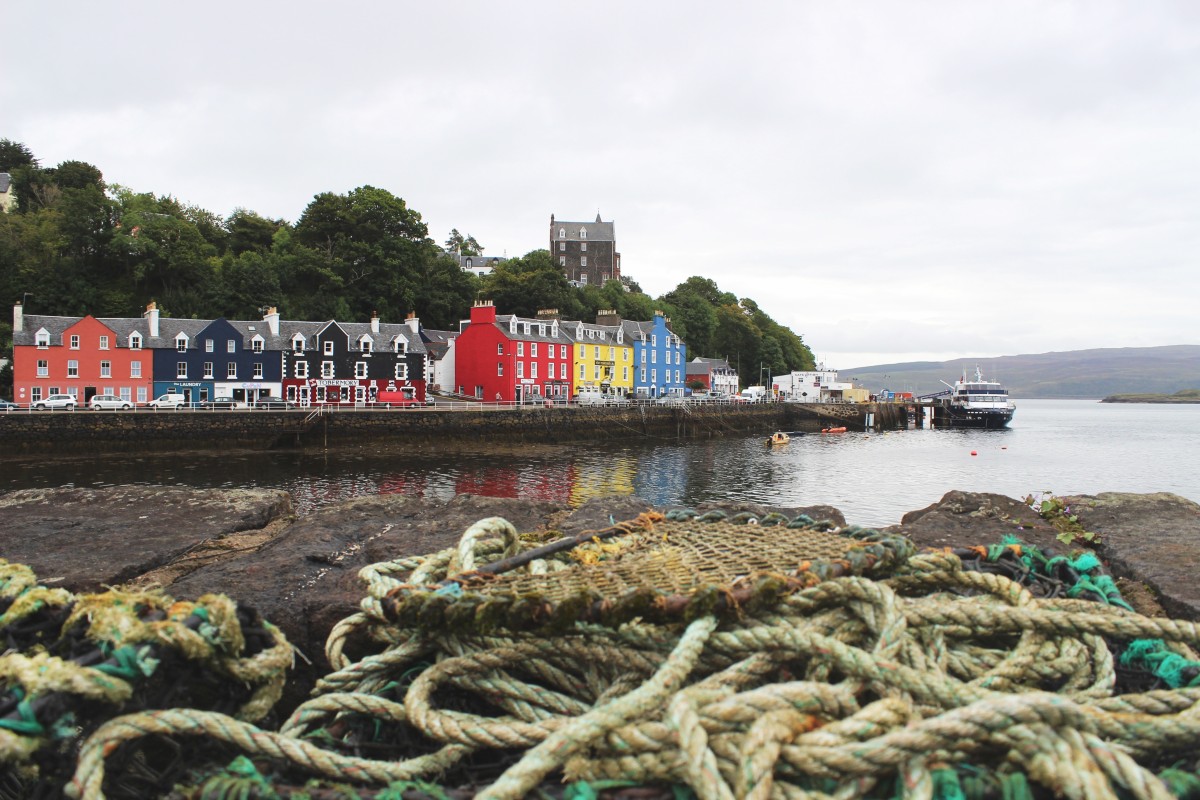 The Isle of Mull is one of my absolute favorite places in the UK. We only spent a weekend here, but I wish it had been longer. There seemed to be endless possibilities for exploration both along the coast and within the interior of the island. It’s a short ferry ride from Oban, making it one of the easiest islands of the Inner Hebrides to reach. If you’re lucky, you’ll have an amazing view of the castle from the water as you arrive at the island. 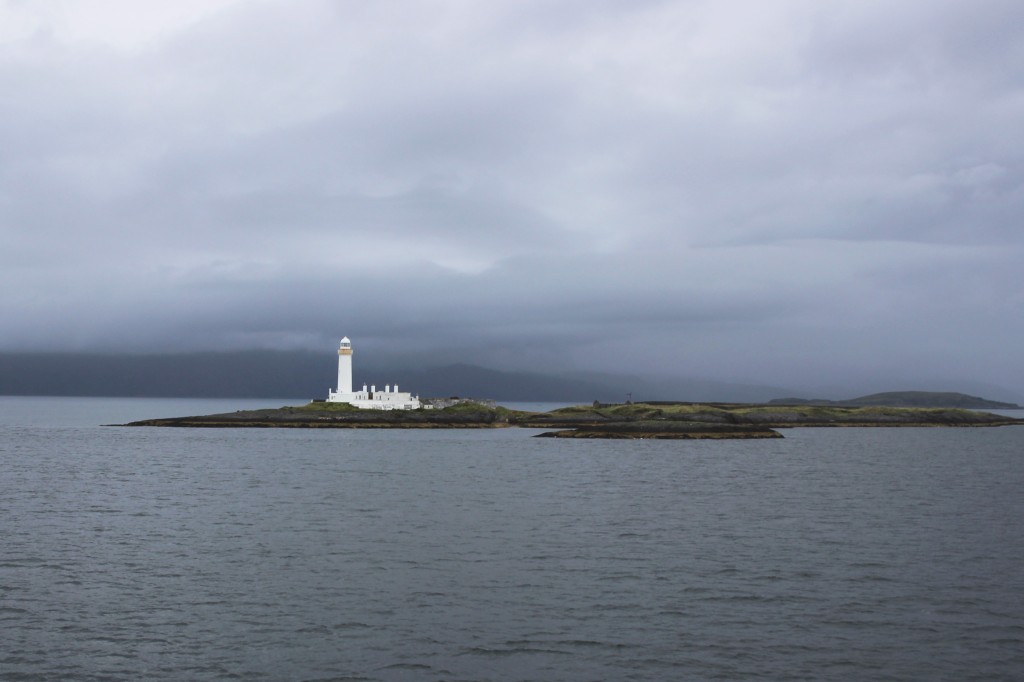 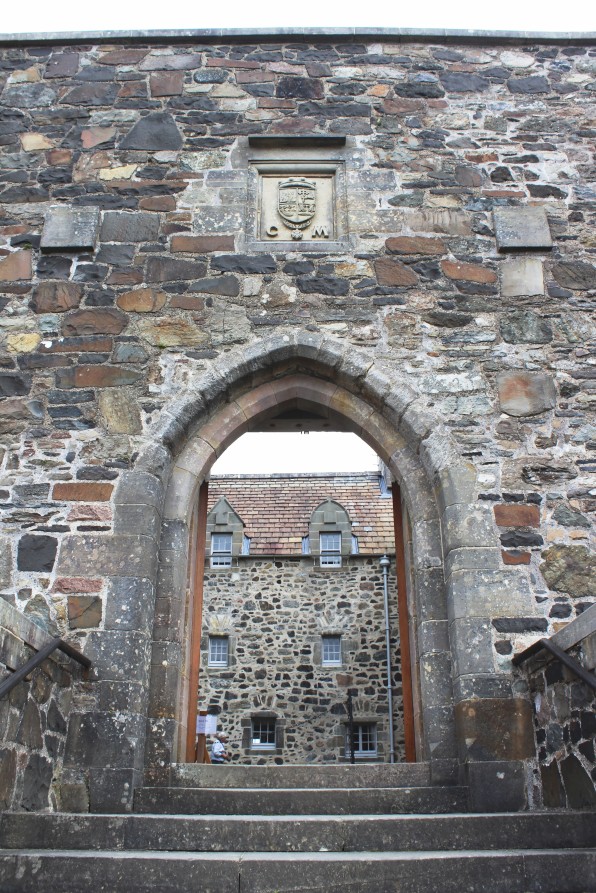 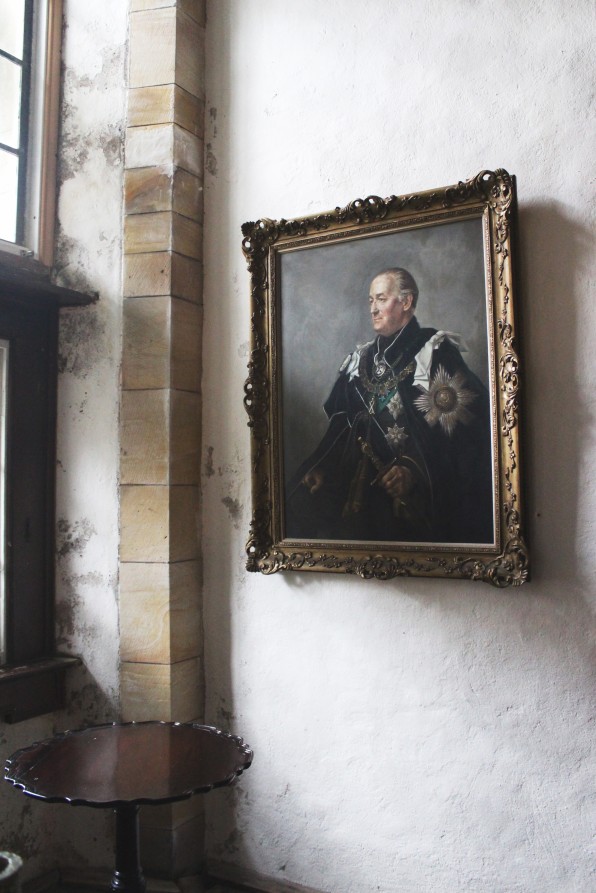 We took an early ferry over to Craignure on a Saturday morning leaving us the whole day to venture around the island before heading to our campsite. Straight away, we left for Tobermory (on the North side of the island) with a plan to visit the distillery and harbour before stopping for lunch at the Isle of Mull Cheese.

Tobermory Distillery | The whisky distillery in Tobermory may not have a tasting room, but they sell plenty of small samples if you don’t want to commit to an entire bottle. We bought a few small ones so we could sample them all. Also, their whisky fudge is the best I’ve ever had! 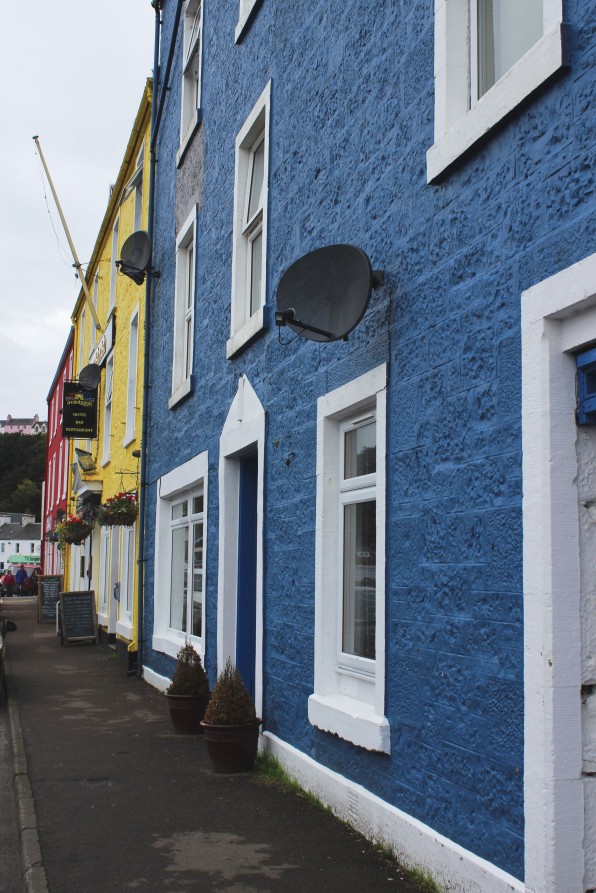 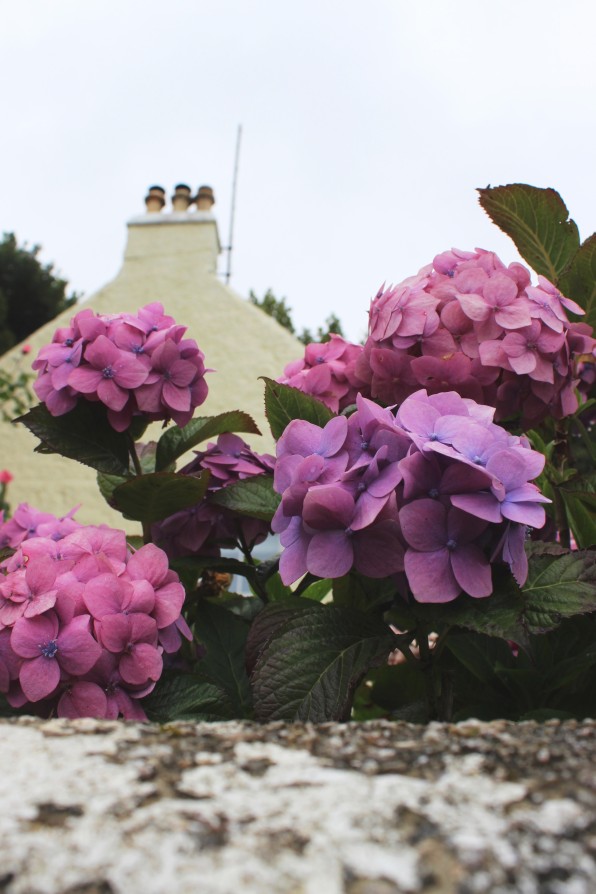 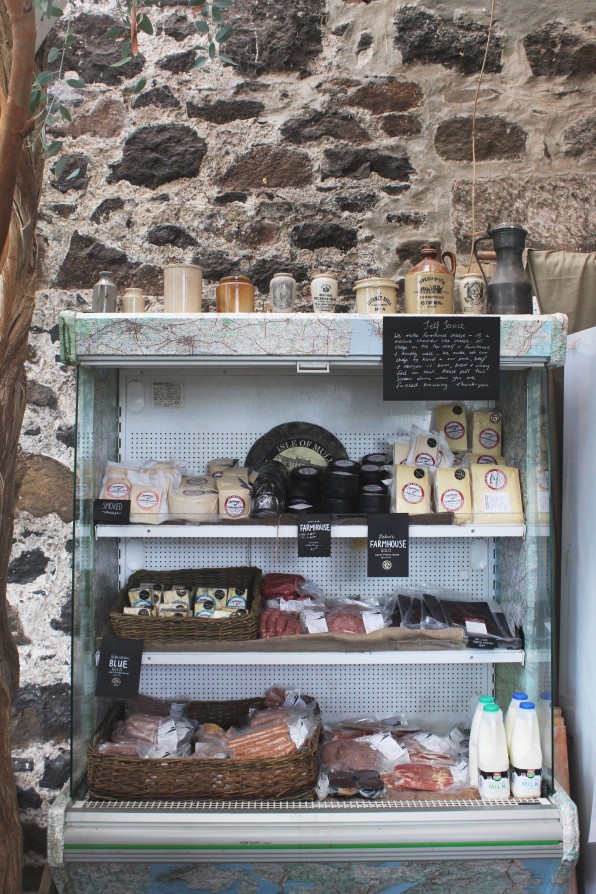 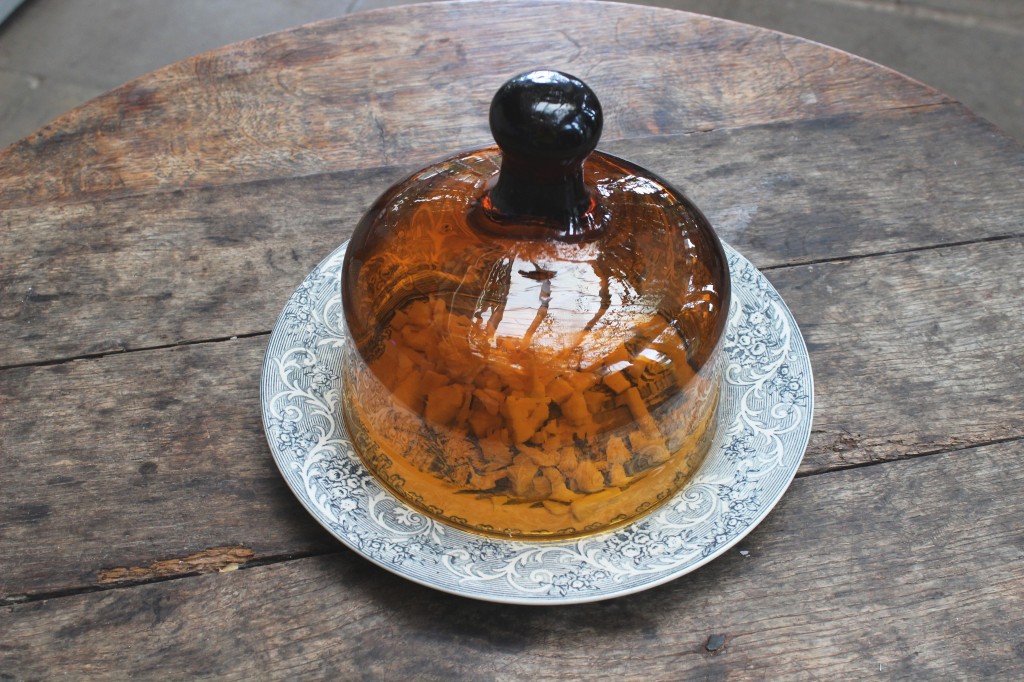 Isle of Mull Cheese | This was the cutest little shop and restaurant! We were out of luck as the café was closed during our visit (which seemed especially odd as it was a relatively busy bank holiday weekend). However, the shop works on a trust system, meaning there is a small cash box where you leave your payment, so we were able to buy some supplies for a few meals.

Mishnish | The only pub we were told to go to. We didn’t eat here, but we heard good things about it!

For the most part, we cooked our meals at our campsite. There is nothing better than barbecued burgers and s’mores by the campfire, looking out at the sea. 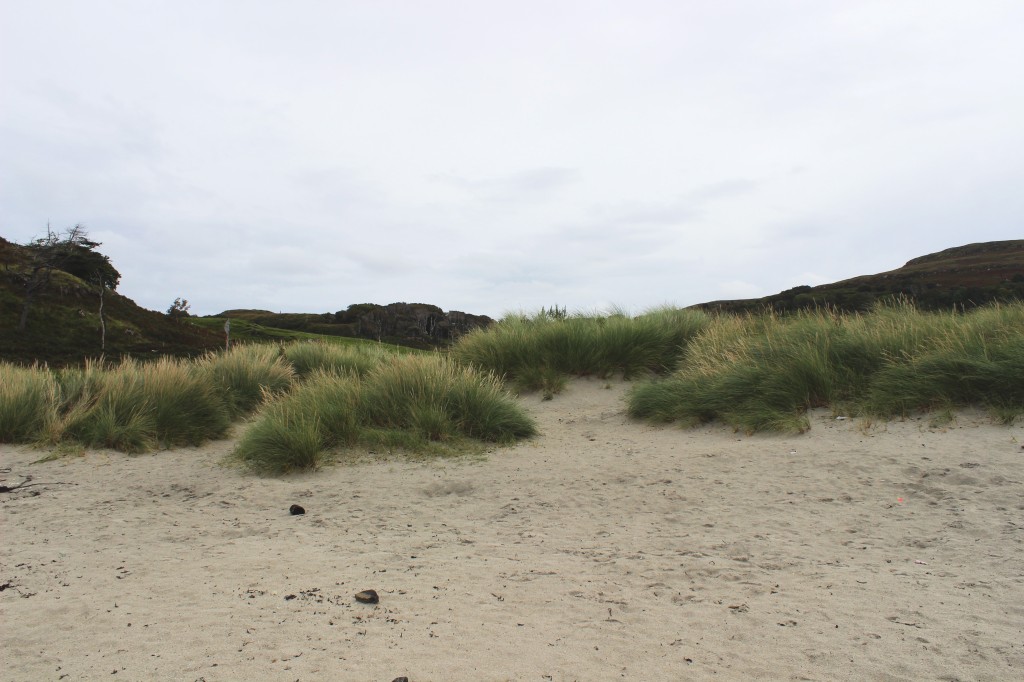 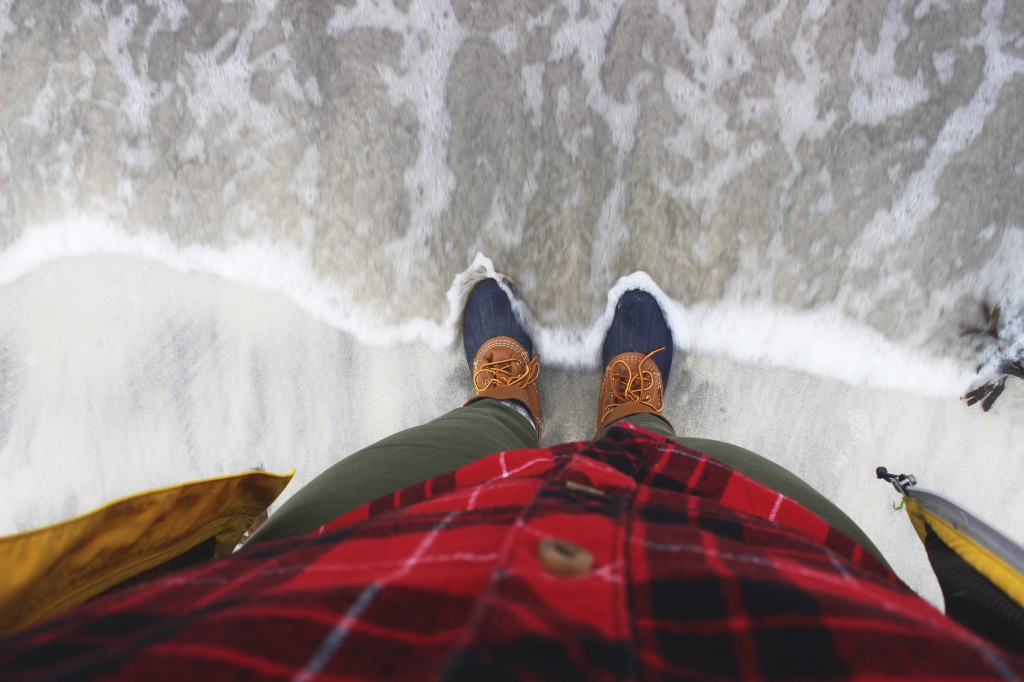 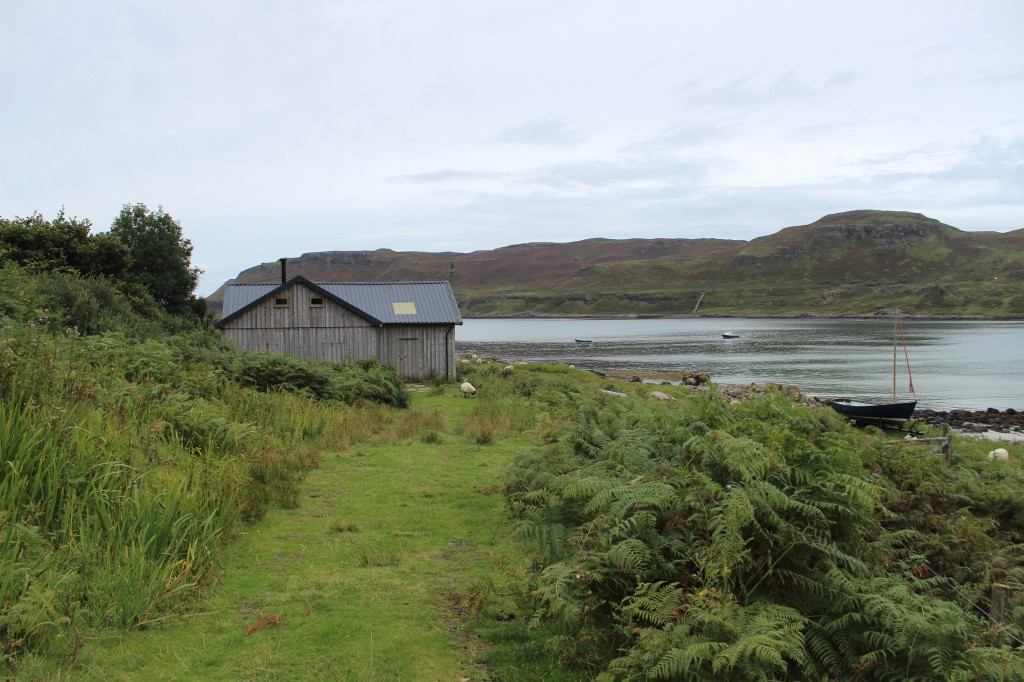 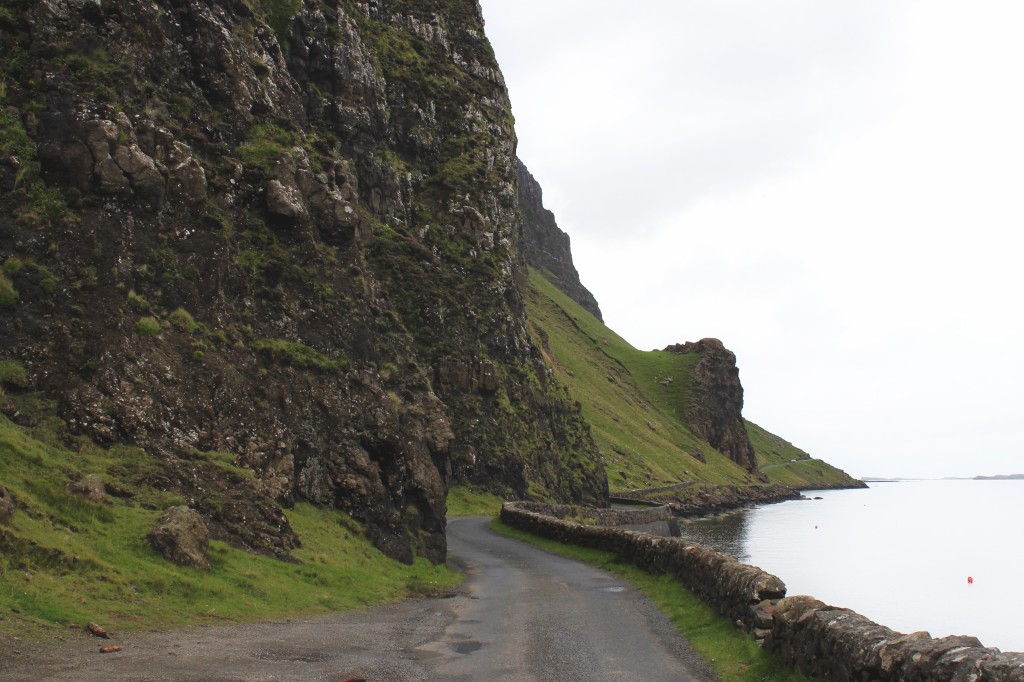 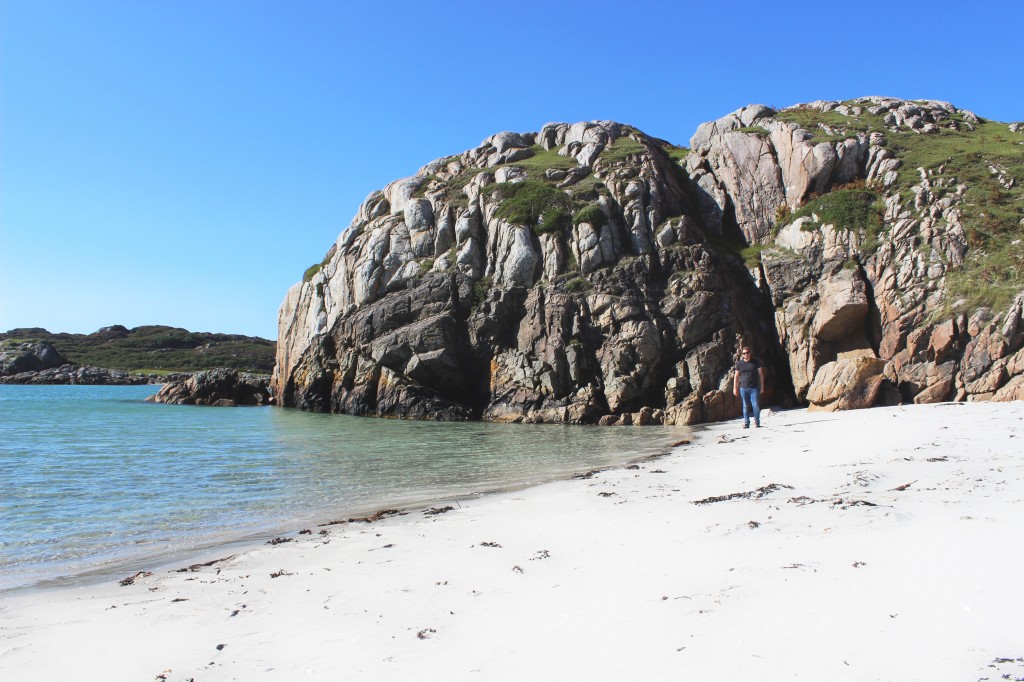 We pretty much just drove around stopping at anything that looked cool, but we did have a couple places in mind to go to.

Calgary Bay | This is a nice wide beach, perfect for swimming. There are also a couple cool places to stay near here (linked above).

Knockvologan Beach | Finding this series of small coves was a bit confusing because the roads are seemingly not well traveled. I think we even had to open a cow gate ourselves in order to continue on the road. Once we found what we thought was parking for the beach (but actually just looked like someone’s farmhouse), it was pretty easy to continue on foot. We saw a couple kayakers out while we were relaxing on the beach and were a little jealous. The coves would be so much fun to explore by kayak! Then again, we had the shore entirely to ourselves and it was lovely.

FYI: the Isle of Erraid, which you can reach from Knockvologan by sand at low tide is Robert Louis Stevenson’s Treasure Island.

Tobermory Harbour | At first we weren’t sure we’d have time to stop in Tobermory because it was fairly far from our campsite as well as most of the other sites we planned to visit, but I am so glad we made the time! There were actually some really cool shops in the town and the view of the harbour is picturesque.

Eas Fors Waterfall | A waterfall that meets the sea near the ferry to Ulva. I’m not sure how to get down below the waterfall, but there is a really cool viewpoint from the top looking down. It’s pretty much right off the road, so there’s almost no walking involved!

Duart Castle | I’m not sure this castle is a must-see, especially if you’ve seen other Scottish castles before, but it is definitely worth a stop if you have the time. Perhaps it would have been a better visit for us, had it not been covered in scaffolding. And it is really easy to visit on your way onto and off of the island with its proximity to the ferry in Craignure. 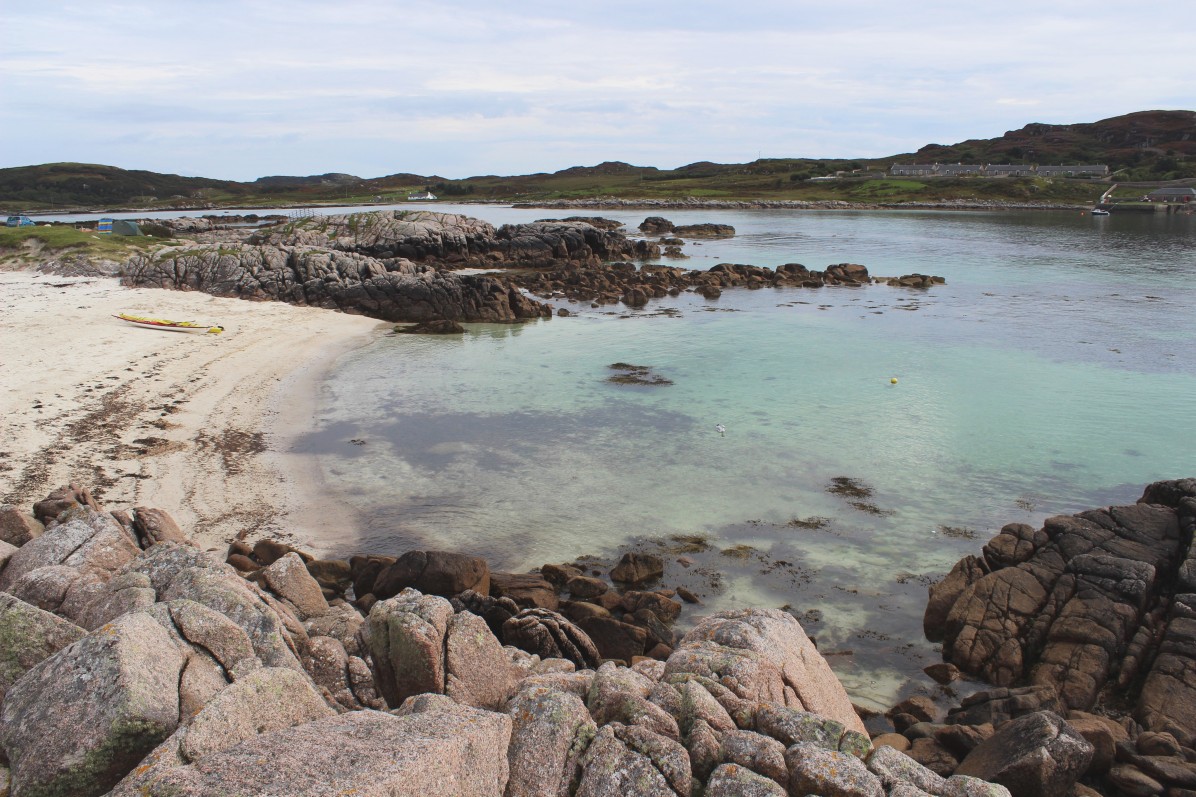 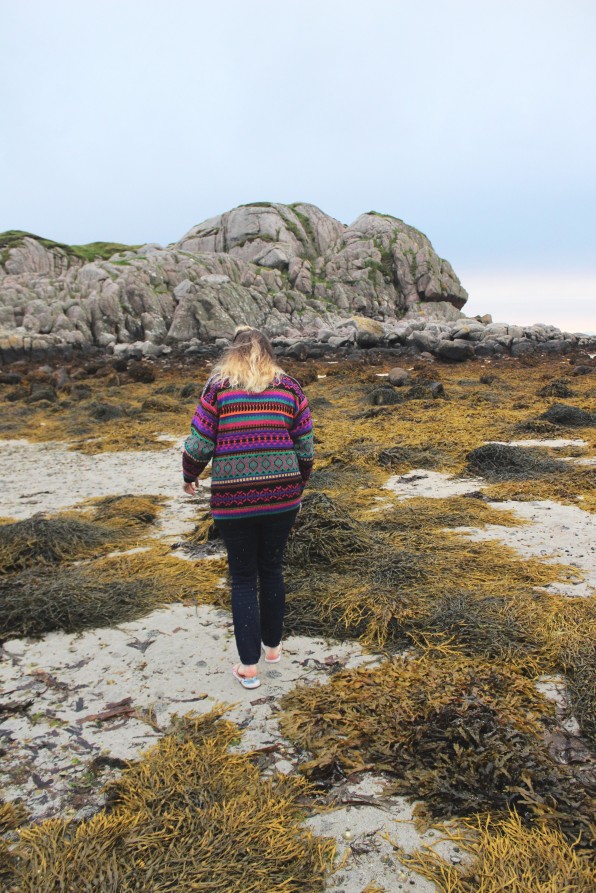 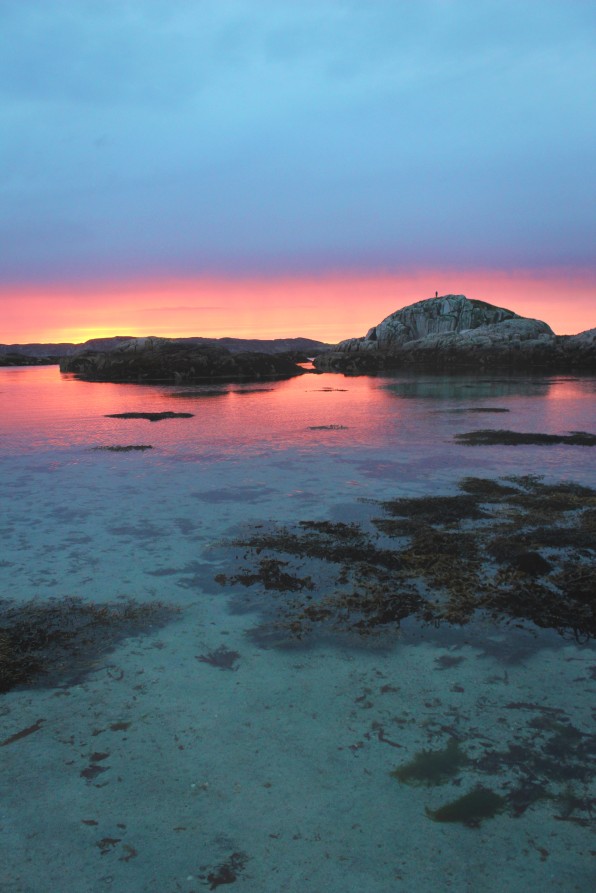 Fidden Farm |This is one of the best campsites I’ve ever been to and by far the best one in the UK. Our tent was set up on the grass just behind the rocky shore of the Fidden Beach and those sunset pictures were literally taken while we were cooking our dinner. It was also super helpful to be so near the ferry to Iona and Staffa, as it leaves from Fioniphort down the road from the farm. Just remember to bring bug spray! The midges can get pretty bad if there’s no wind. Upon leaving the island, we were given this map on our way onto the ferry. We realized it would have been so helpful for planning our trip, so I’m including it here to show where the main attractions are. Be sure to book ahead for the ferry, as the most popular times sell out before the day of the sailing. And stay tuned for another post on our visit to the Isles of Iona and Staffa! 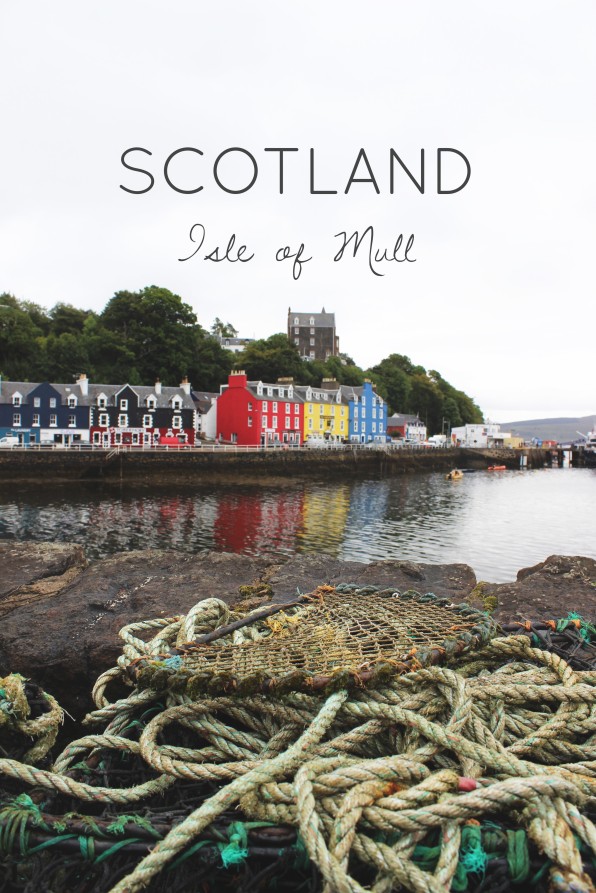 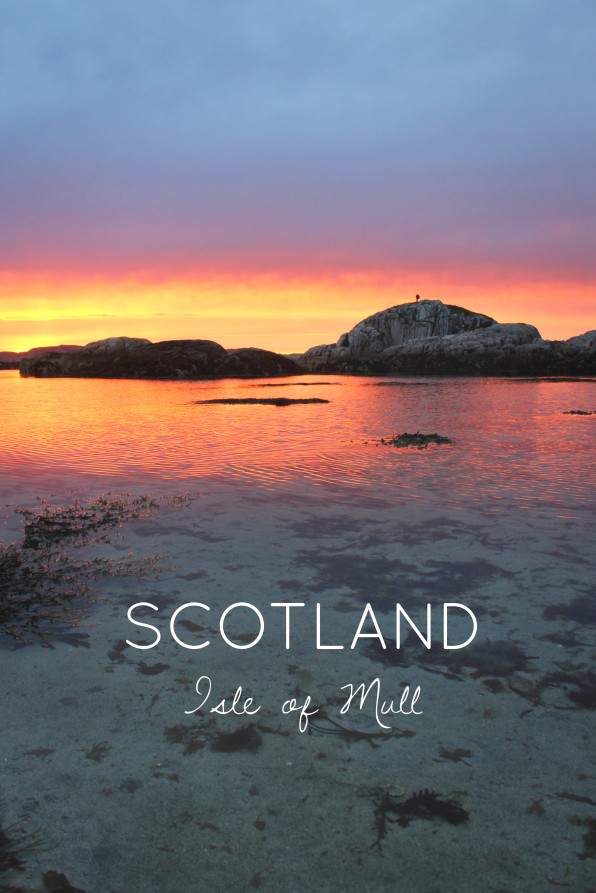 5 thoughts on “Isle of Mull, Scotland”