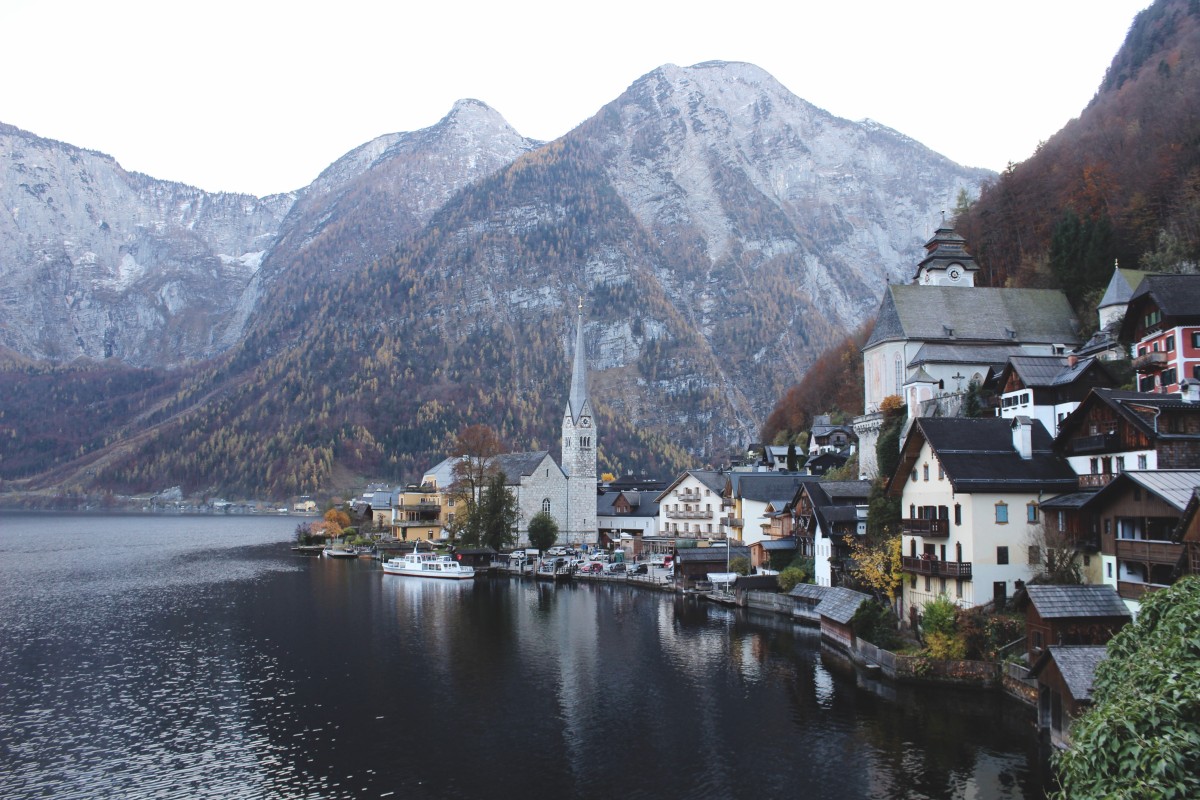 A few weeks ago, we went to a place that has been on my bucket list since we moved here: Hallstatt, Austria. George’s sister and brother in law were visiting from the States and it seemed like the perfect opportunity to see the tiny lakeside village. I think we caught the very end of the fall colors there which was also really cool to see.

Hallstatt is not only the oldest village in Austria, but probably also the most photographed. Even in the off-season, the village is full of tourists who took the ferry over the lake for a day-trip. However, because we decided to stay overnight, it felt like we had it all to ourselves. We stayed in the Seehotel Grüner Baum, which faces the lake on one side of the hotel and the market square on the other. Our room had a balcony overlooking the market square! 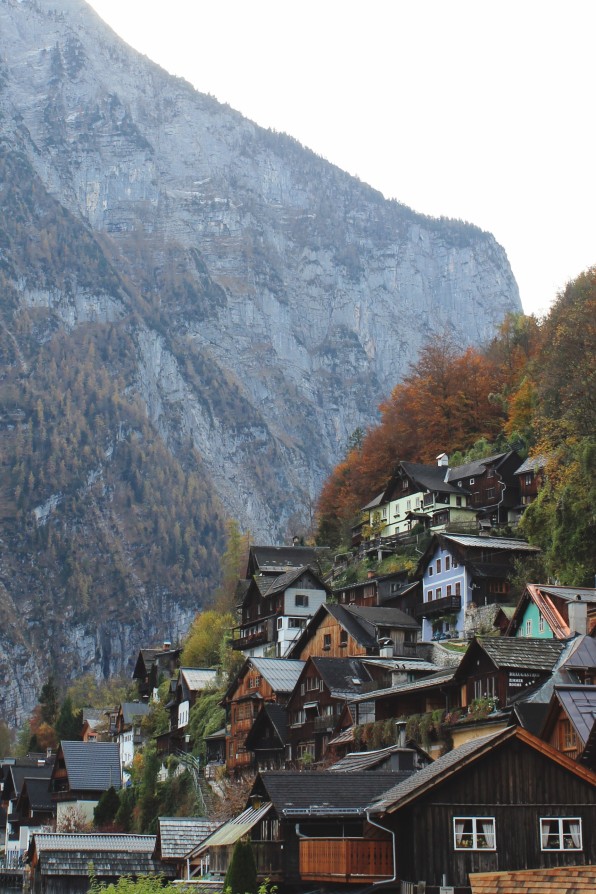 There is not a ton to do in Hallstatt during the day, aside from walking around and taking pictures, but it was a very peaceful place to spend a weekend. I can imagine it getting crazy in the summer, but in November, things were pretty quiet. 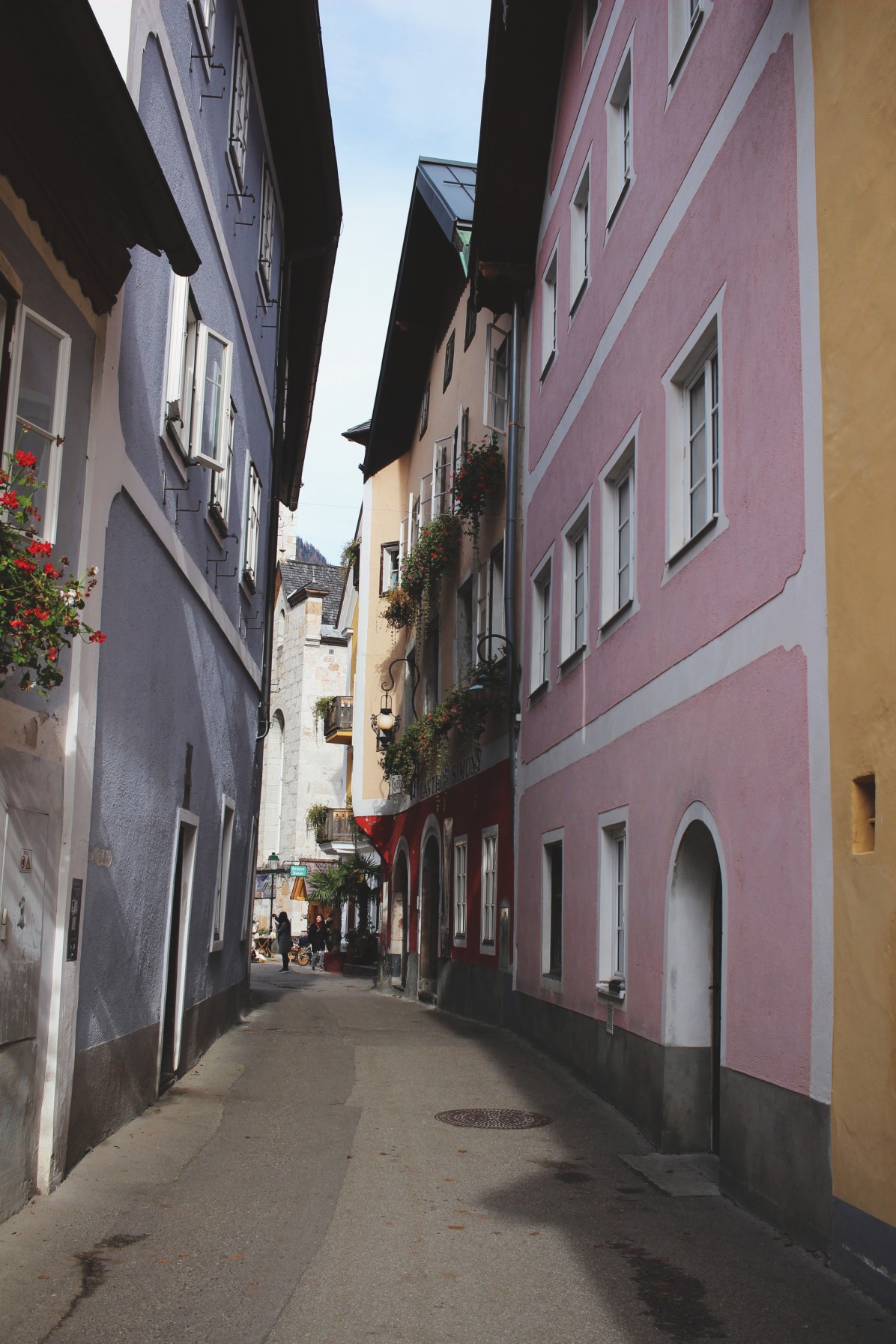 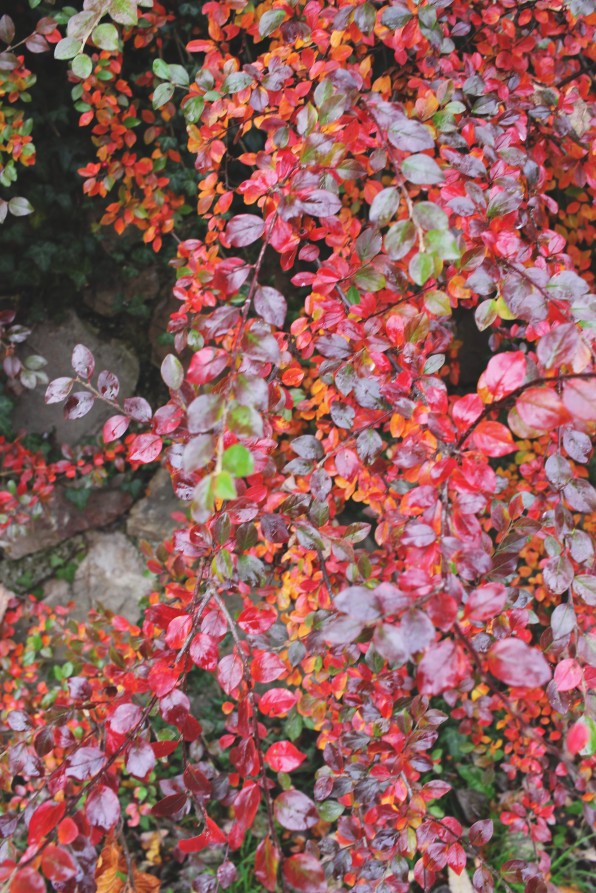 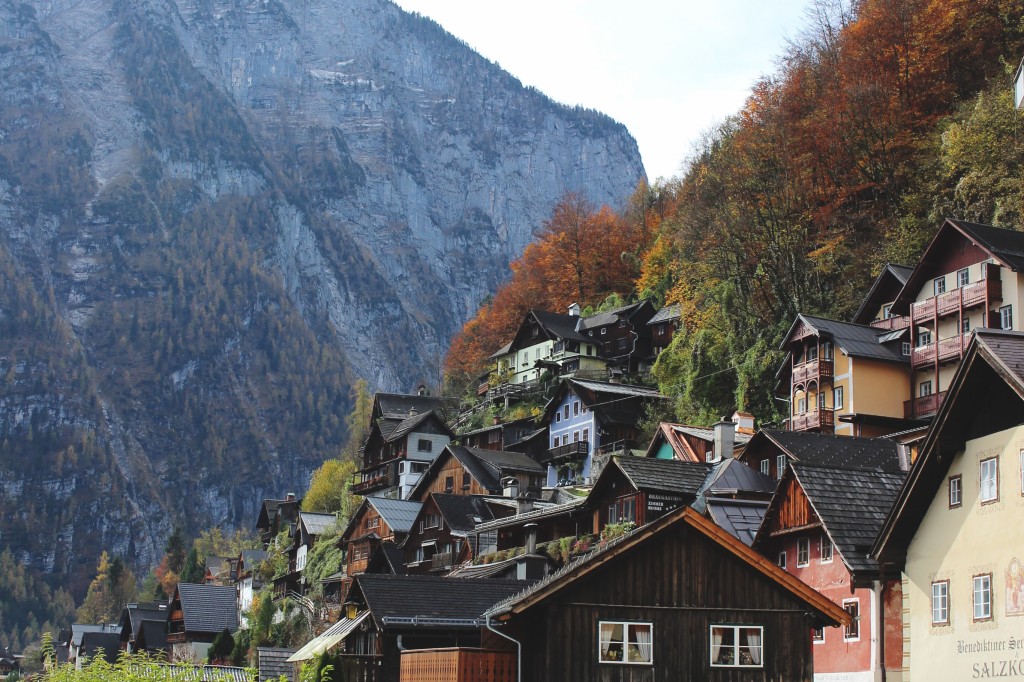 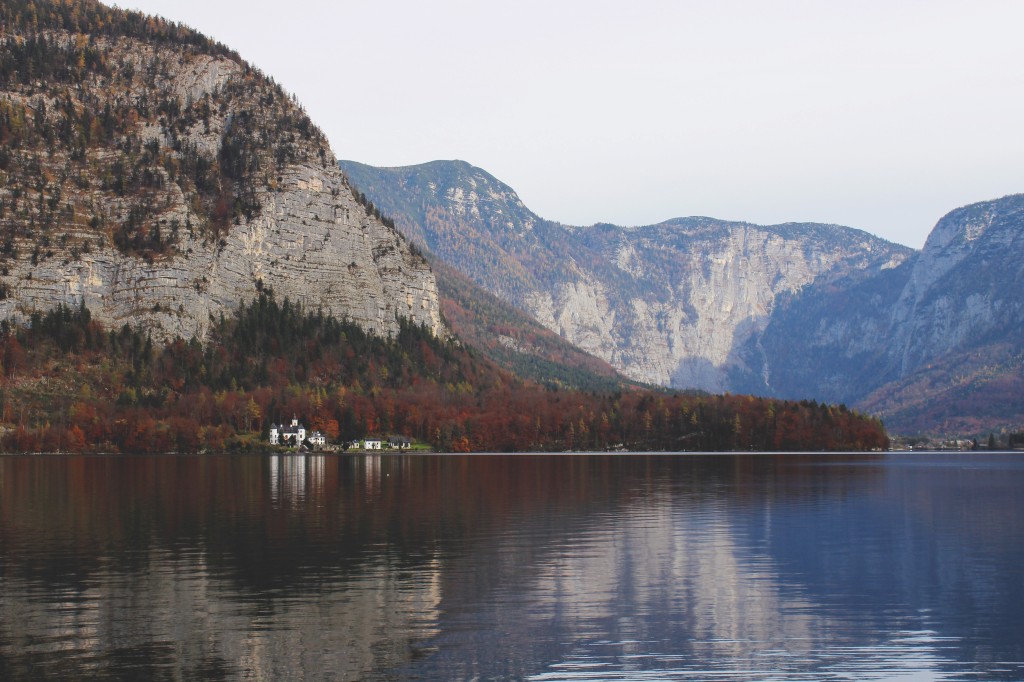 On our first day there, we took the funicular up to the famous salt mine for a view looking over Hallstatt and the surrounding Dachstein mountains. This area of Austria is called the Salzkammergut (salz meaning salt, in German) and salt production here has been traced back to the Bronze Age. Once at the top, we simply took in the view while sipping hot chocolate and mulled wine, but for the more adventurous, there were plenty of trails leading into the mountains. We also stopped into the gift shop to buy some salt-themed souvenirs. 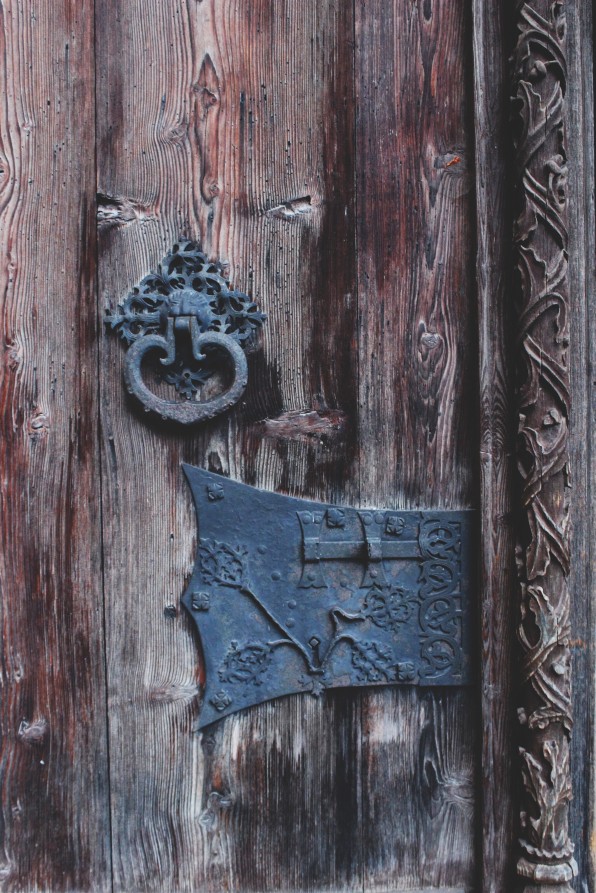 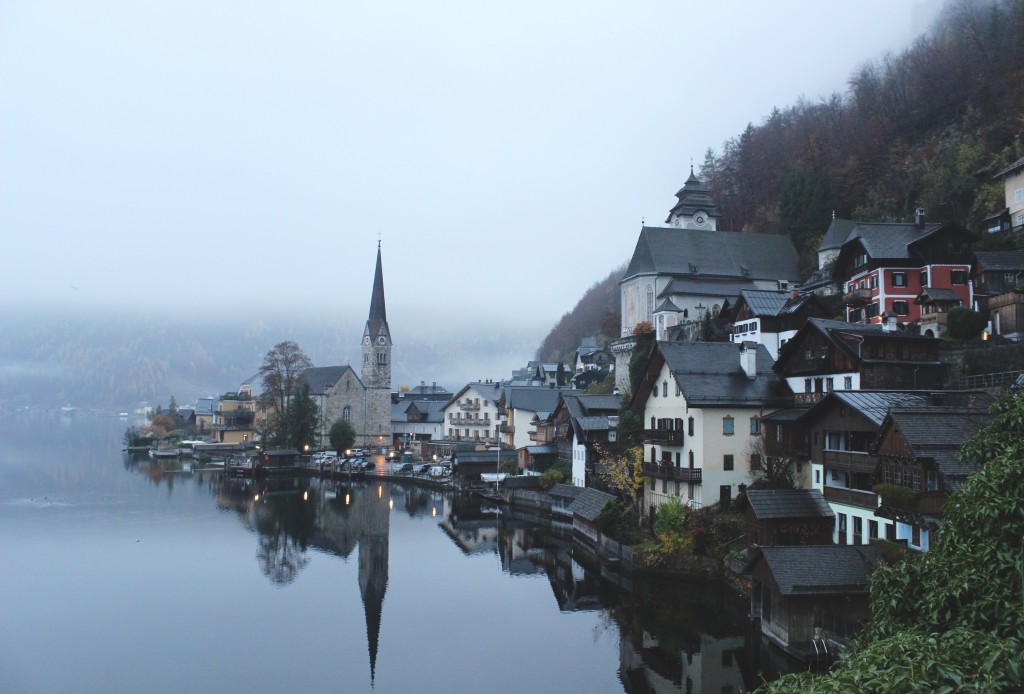 The next morning, we woke up to a fog-covered lake and a forecast of rain for the rest of the day. We didn’t have set plans for the day, but in the end we decided to head to Königsee, which is actually a lake in Germany. It was about an hour’s drive from Hallstatt. 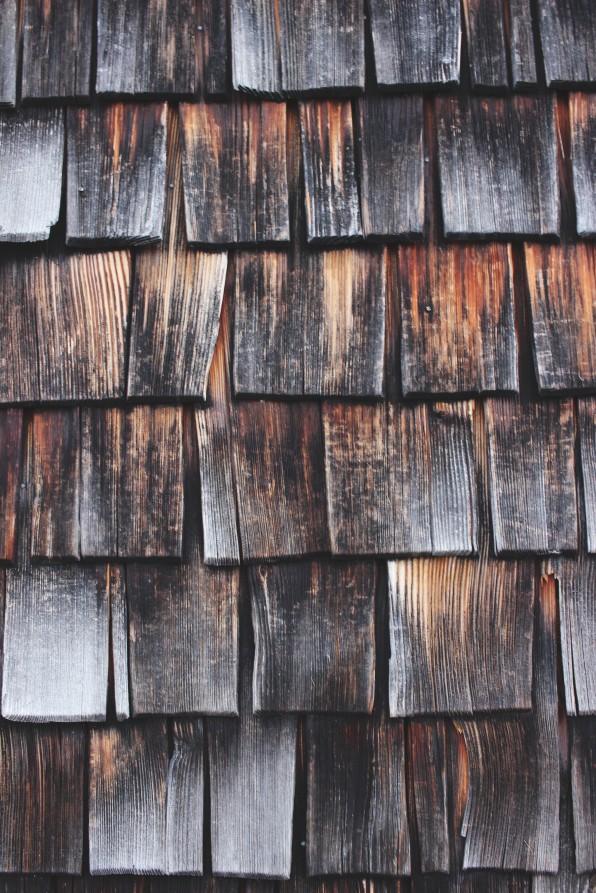 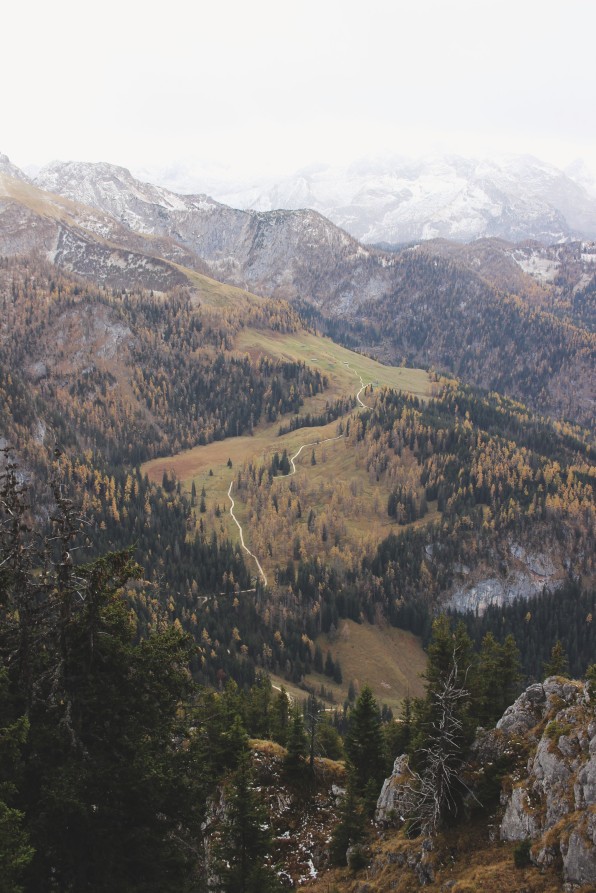 First we took a cable car up the Jenner mountain for a view from above the lake. The weather really was awful, but I think we made the most of it. The ride up the mountain in the weathered and creaky cable car was an experience in itself! 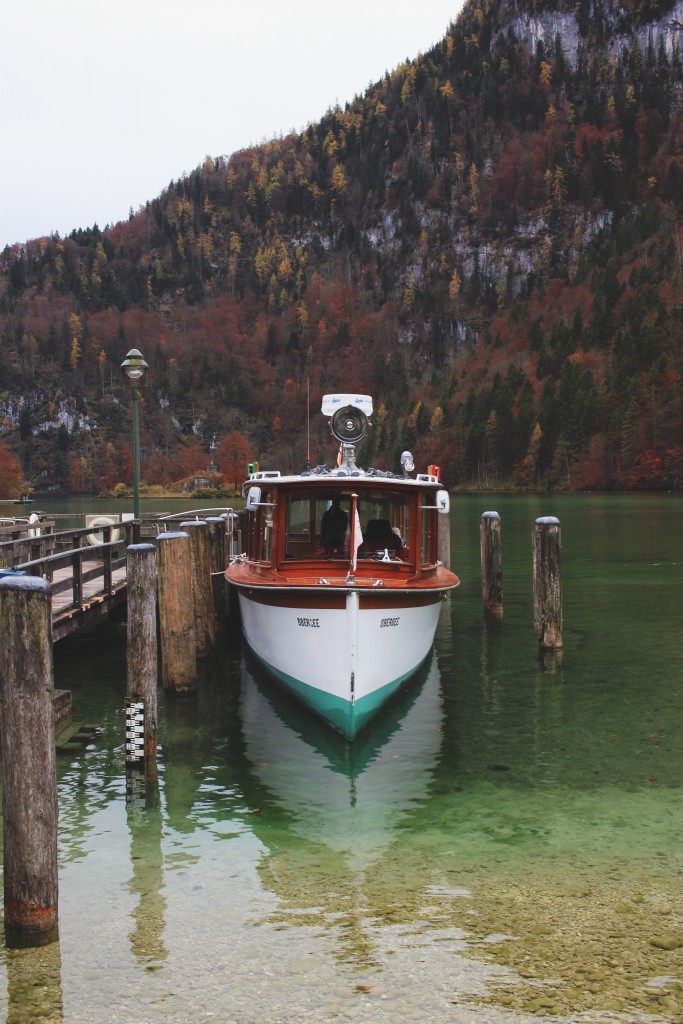 After returning to ground-level, we made our way over to the lake to see it up close. I can totally see why Königsee is so popular with German tourists; the water was so clear even on a cloudy day and the mountains surrounding the lake give it a fjord-like feel. Looking back on the trip, I do wish we had taken a boat tour across the lake. The lake is so long, that would be the only way to see all of it!

But we were all tired from walking around in the rain and decided to head back to our hotel instead. That night we ate dinner at the hotel in their lakeside restaurant. I’m sure sitting on the terrace on a summer night would be amazing, but for a fall or winter trip I would suggest eating somewhere else. The food was just not that special. 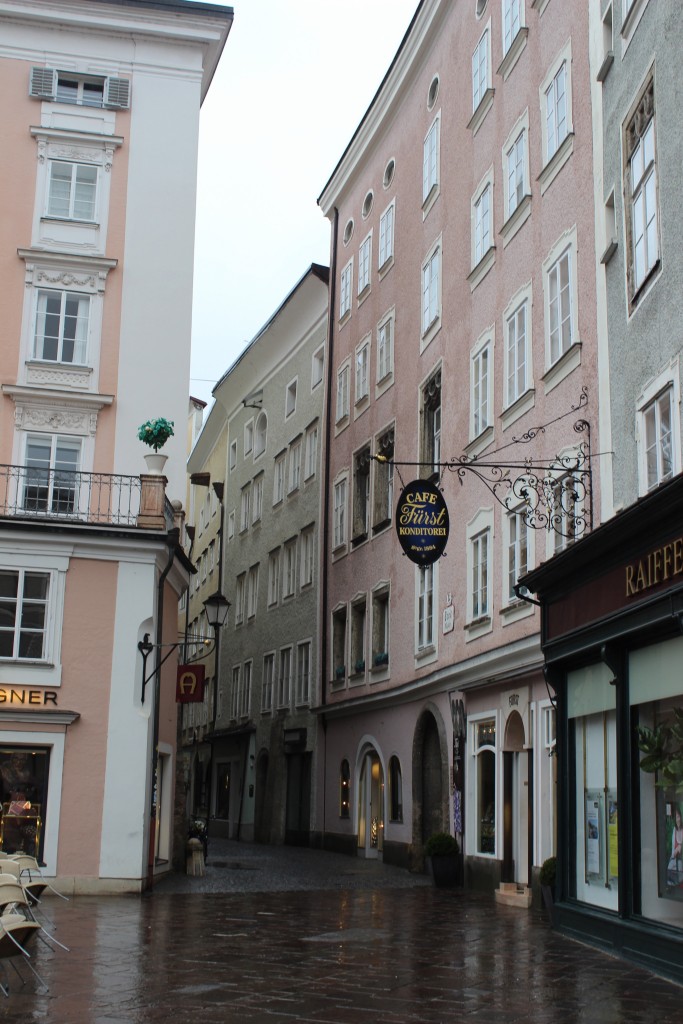 Our final day in Austria was even wetter than the previous day. We had planned to escape the rain with some shopping and sightseeing in Salzburg, but when making those plans I forgot that it was Sunday. So when we arrived in the city, everything was closed aside from a few tourist shops and cafés. 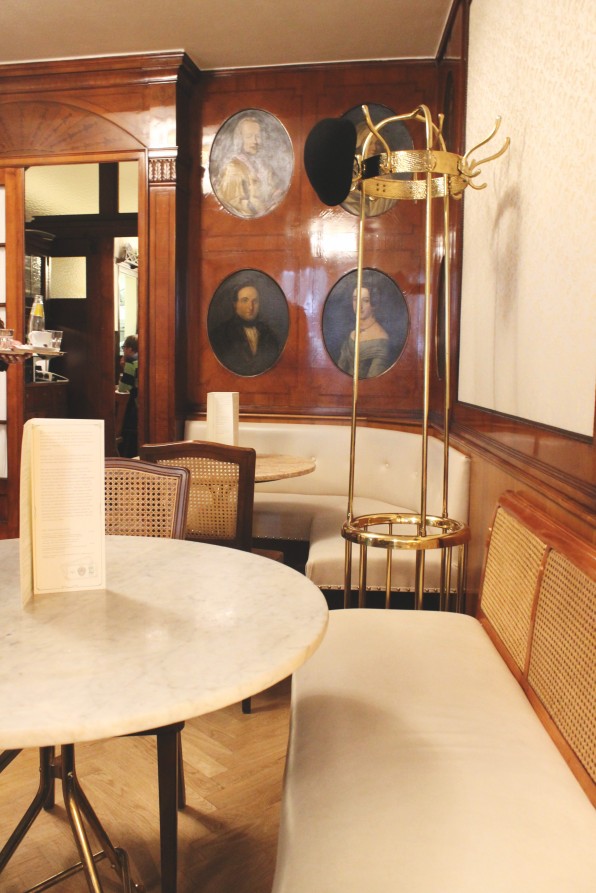 Luckily, the café I had chosen to take us that morning was open! Café Tomaselli is the oldest coffee house in Austria with origins dating back to 1700. And it was said to be a favorite of Mozarts. The experience is a little different from your average European coffee shop, so it’s good to be aware of before you go. First, a waiter will come to the table asking for your drink order, which you will pay for upon leaving the café. Next, a woman will bring an entire tray of cakes and pastries to the table and you can choose as many as you want. These must be paid for immediately. Of course, we each chose something different so we could sample them all! It definitely made our coffee stop feel more special and upscale.

This is the view from the terrace outside the modern art museum. It was so simple to get to! You just take an elevator from street level up to the museum and walk outside. We did not pay to go into the museum. 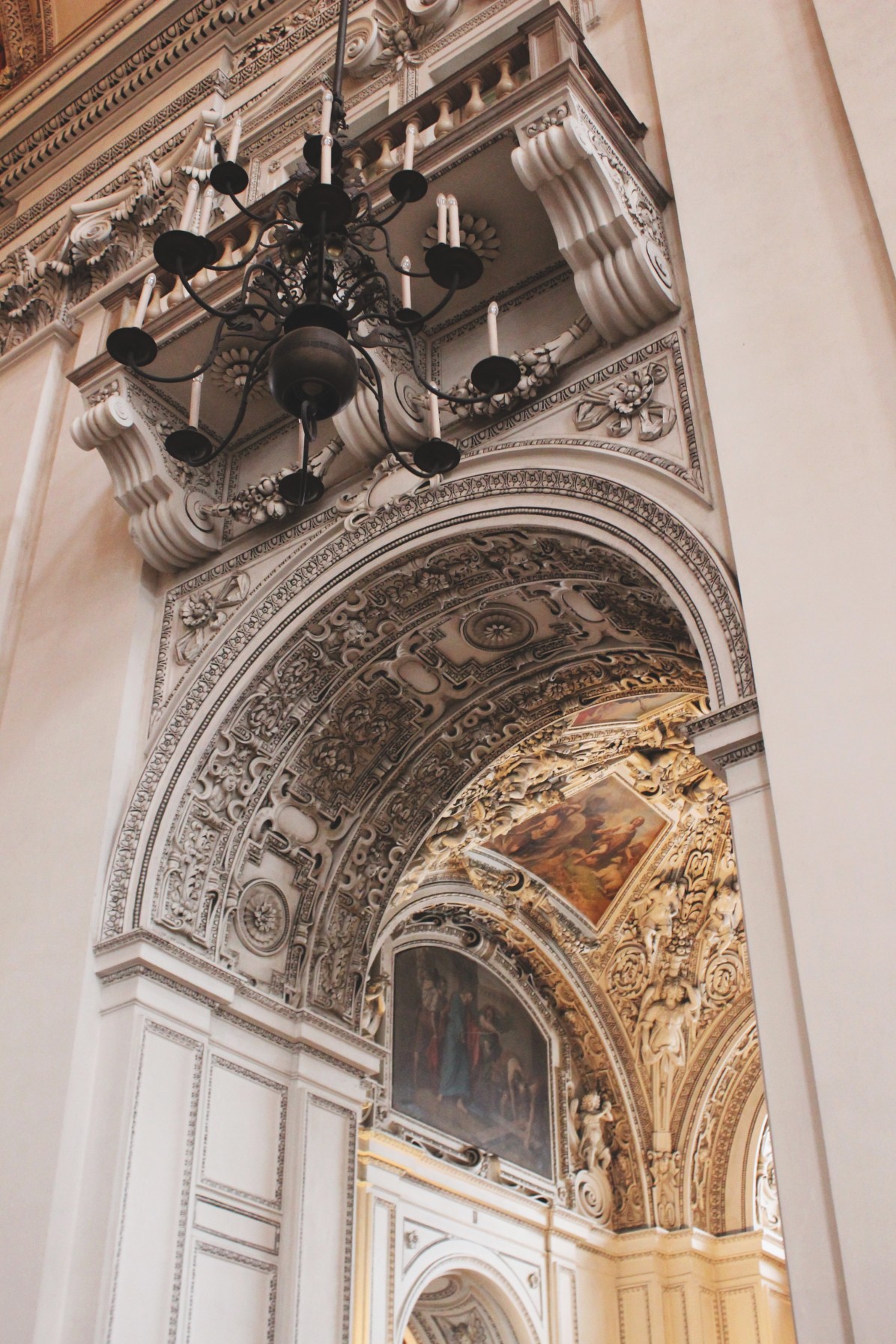 Later that day, we were able to squeeze in a couple Sound of Music stops like the Mirabell Palace and gardens, but we spent the majority of the afternoon hiding away at the Augustiner Brewery. As you pass through their delicatessen arcade on the way to the beer halls, you can pick up snacks like wienerschnitzel, pretzels, and fried radishes. We got a little of everything and found a cozy nook at the end of the hall. 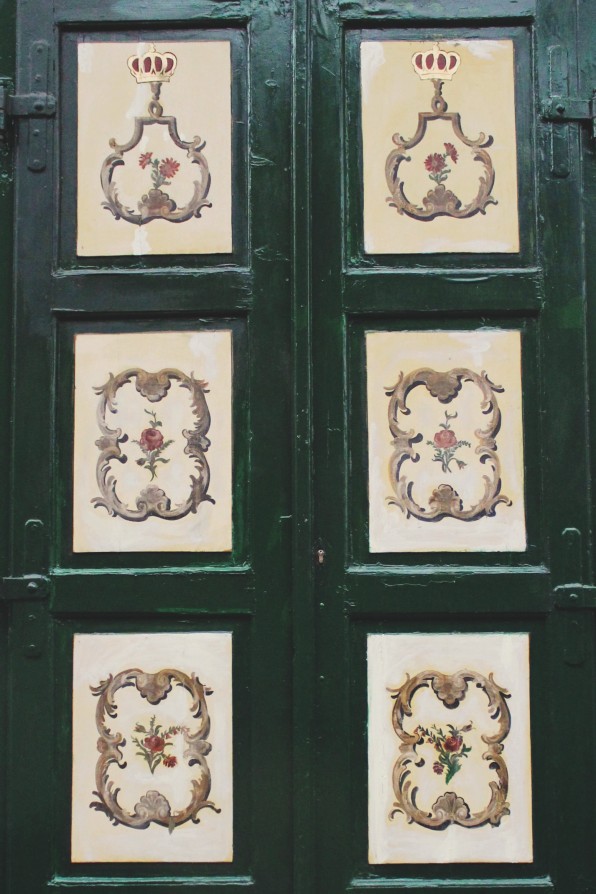 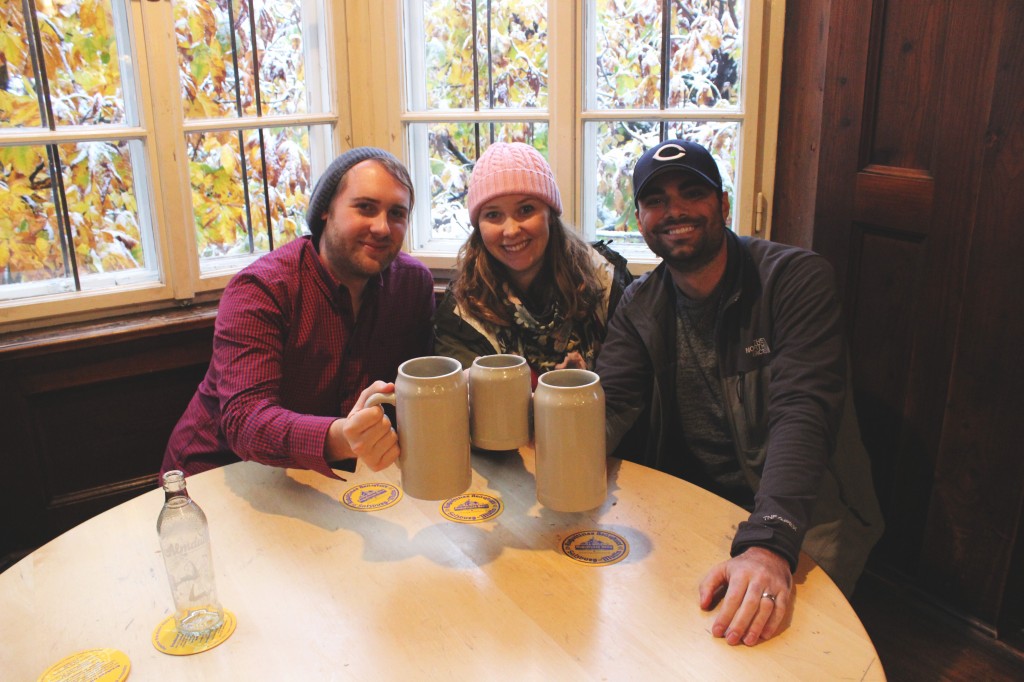 While we were there enjoying our beer and snacks, it started to snow! I realize I may have been alone in my excitement, but it never snows in England so I always look forward to the possibility of snow when we travel. For me, it was the perfect way to end our trip.

One thought on “Weekend Adventure: Hallstatt and Salzburg”